The “13 Flying Black Cats” was a professional aerial exhibition team that started around 1925, advertising they would do ANYTHING for a price. They performed primarily at air shows around Los Angeles and the Southwest but found their niche doing movie newsreels. The group was based at the Burdett Airport located at Western Avenue and 104th Street in Los Angeles (present-day Inglewood), where many worked as pilots and mechanics. Burdett Fuller was a former Naval Reserve flyer and started a flying school and passenger air service in 1919. Among his multitude of students – he soloed about 400 – he taught Jack Frye how to fly, who in turn taught Ronald “Bon” MacDougall.

In 1923, Burdett, Frye, and MacDougall teamed up and established the Burdett Air Port and School of Aviation. In August 1925, flying students William E. Matlock and Paul E. Richter graduated from there. These young men – MacDougall, Frye, Matlock, and Richter – along with their friend, Ken Nichols, who would do “anything in aerial stunts,” formed the core of the famous 13 Flying Black Cats and dazzled weekend crowds at the airport with their breath-taking aerial performances. On July 5, 1925, thousands showed up for the “Burdett Field Air Meet” to watch the air races and stunt flying exhibitions, which also included Frank Clarke, Art Goebel, Jack Frye, Frank Tomick, and Dick Grace. (Clarke, Tomick, and Grace were destined to be stunt pilots in Wings). 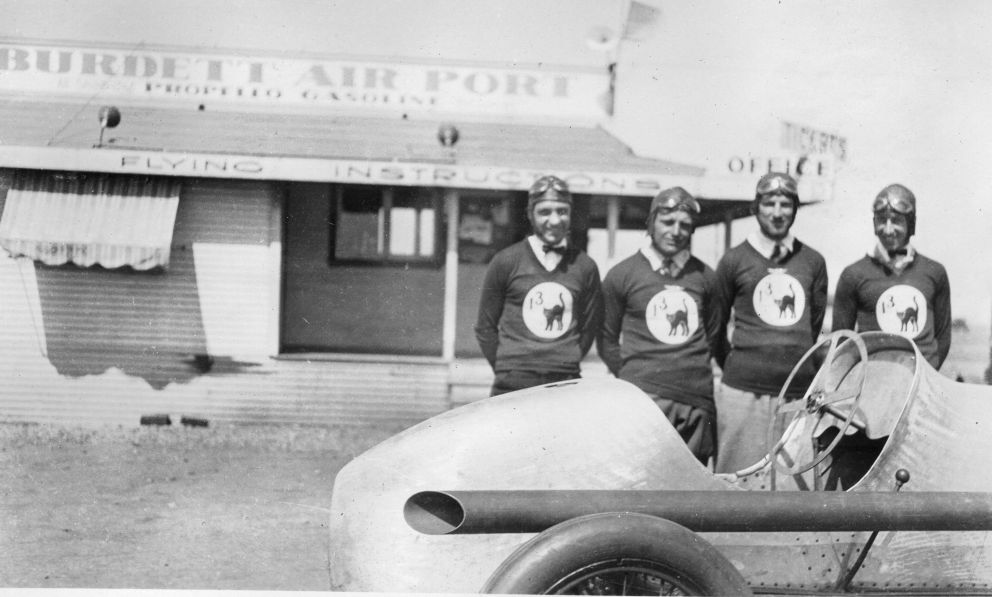 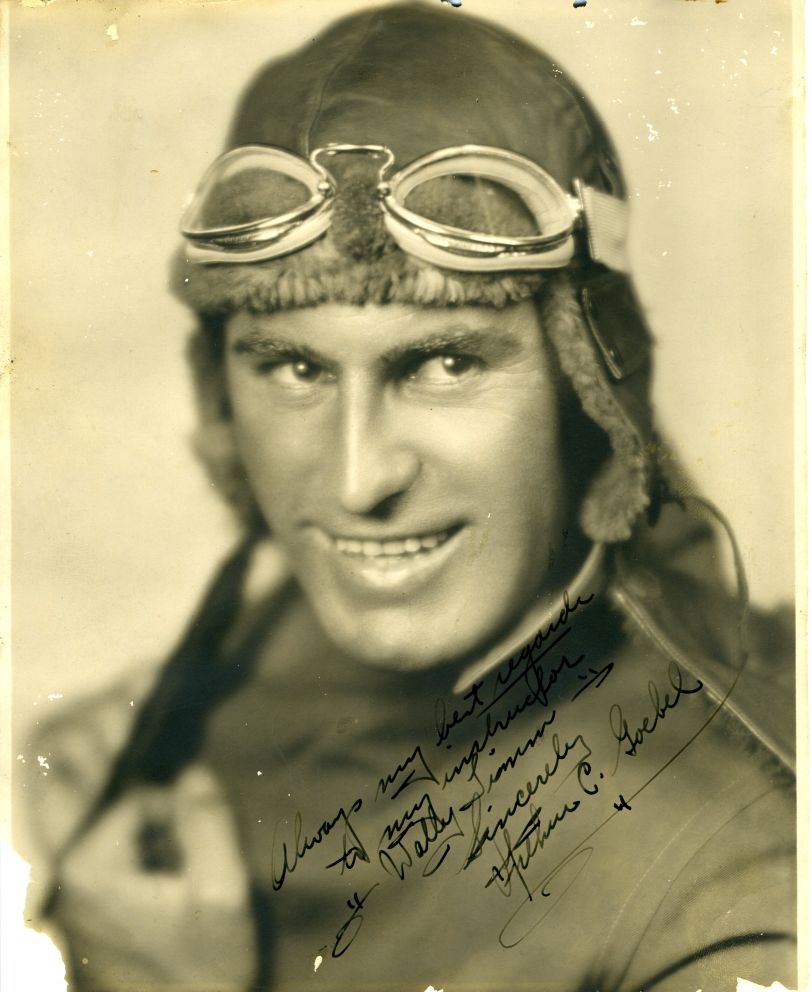 Art Goebel (1895-1973) learned to fly in 1920. He was not a Barnstormer, but one of Hollywood’s top stunt fliers. He was also the winner of the fateful 1927 Dole Air Race, where only two planes survived and finished the race. Inscription reads, “Always my best regards to my instructor, Wally Timm, Sincerely Arthur C. Goebel.” 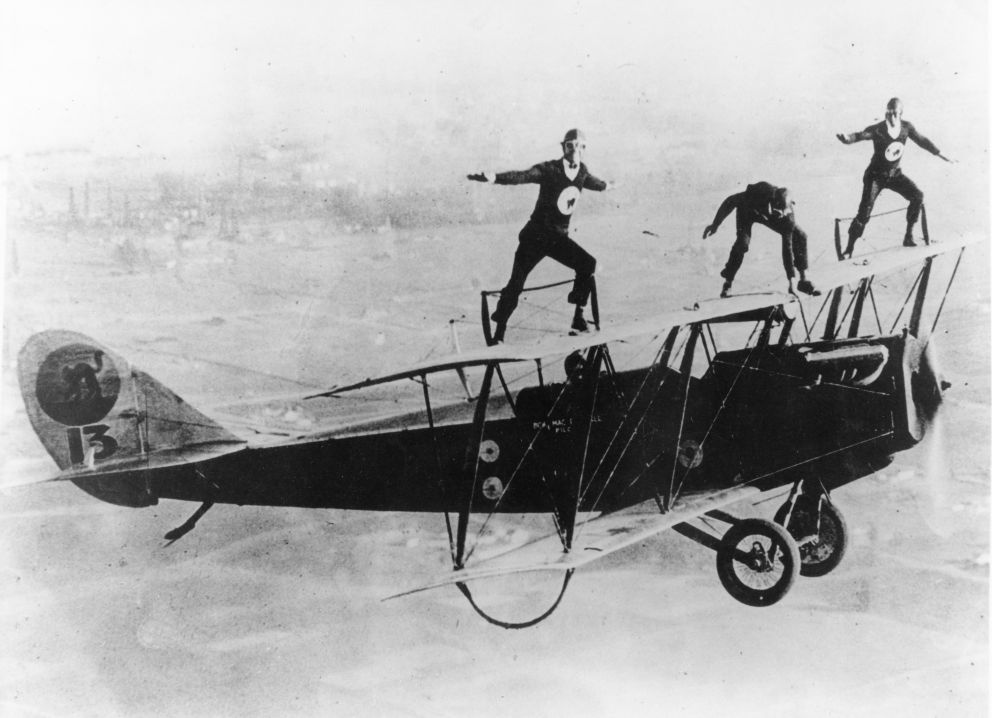 Bon MacDougall pilots while three Black Cats, from left to right, “Spider” Matlock, Al Johnson, and "Fronty" Nichols, balance on the upper wing. A smoke generator is under the nose of the airplane. 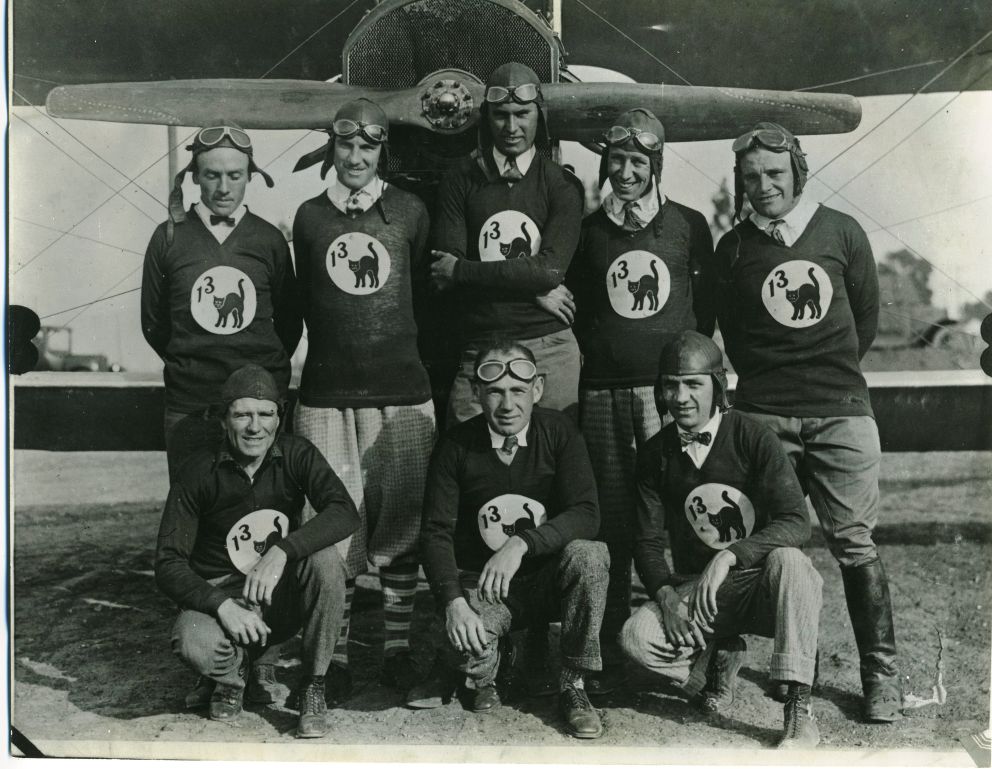 The 13 Black Cats were an evolving group with many members including women, who were never official members. With so many coming and going, many of the participants never received their credit due. 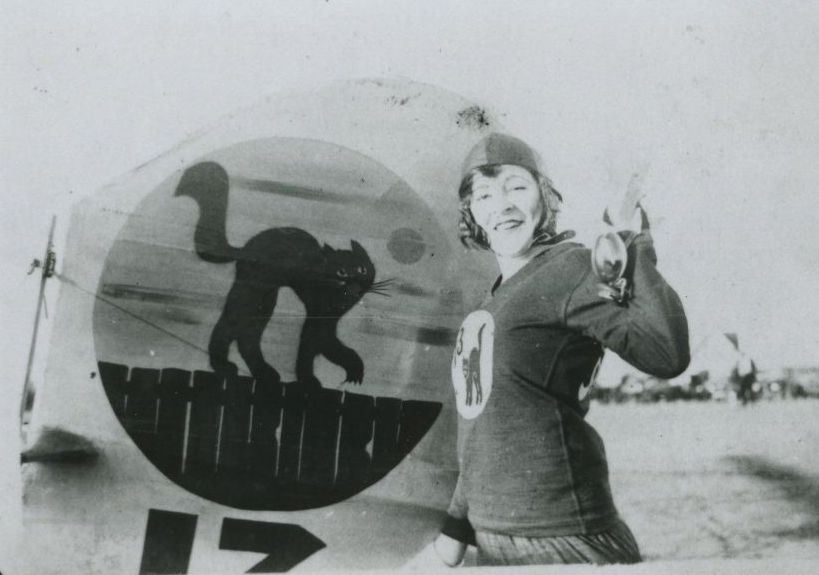 Wing walker, Gladys Roy (1896-1927) was an accomplished parachute jumper and movie stunt actress. She died on August 15, 1927 by accidently walking into a spinning propeller after posing for publicity shots with “Miss Ohio,” Evelyn Wilgus at Watson Field, Youngstown, Ohio. 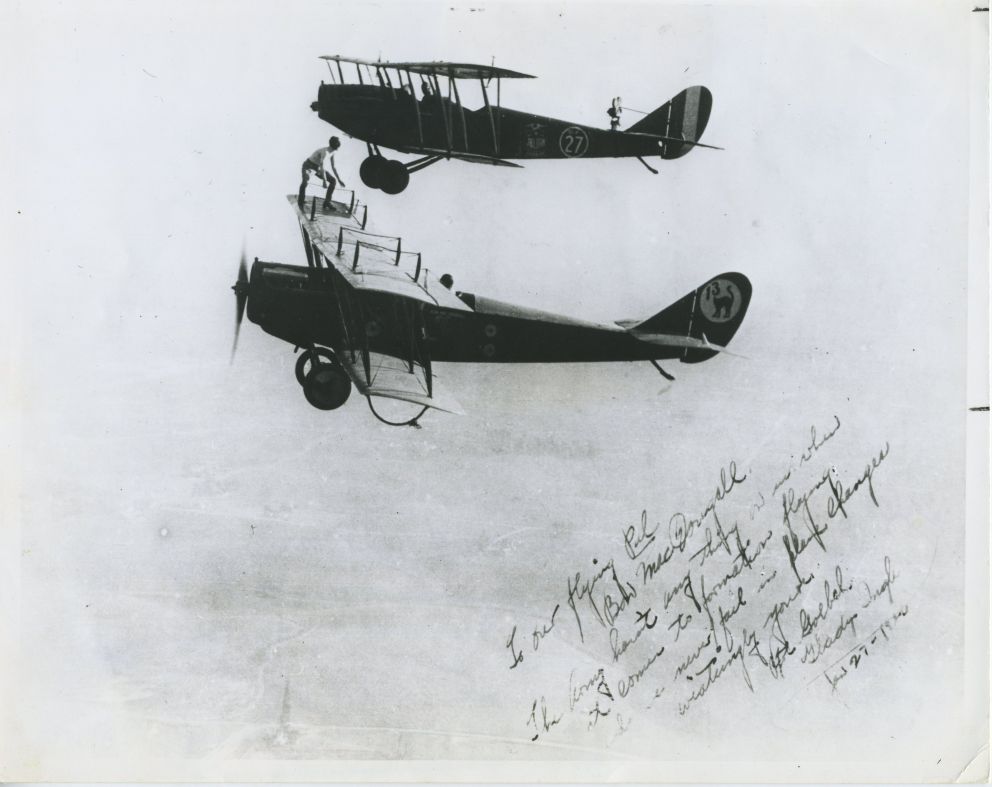 On this autographed photo of Gladys Gertrude Ingle (1899-1981) preparing to transfer from Bon MacDougall's plane to Art Goebel's plane, the inscription reads, "To our flying Pal, Bon MacDougall, The Army hasn't anything on us when it comes to formation flying. And we never fail in plane changes. Aviatingly yours, Art Goebel, Gladys Ingle, Jan 27 - 1926." Note the motion picture camera mounted on the rear fuselage of Curtiss Jenny #27. 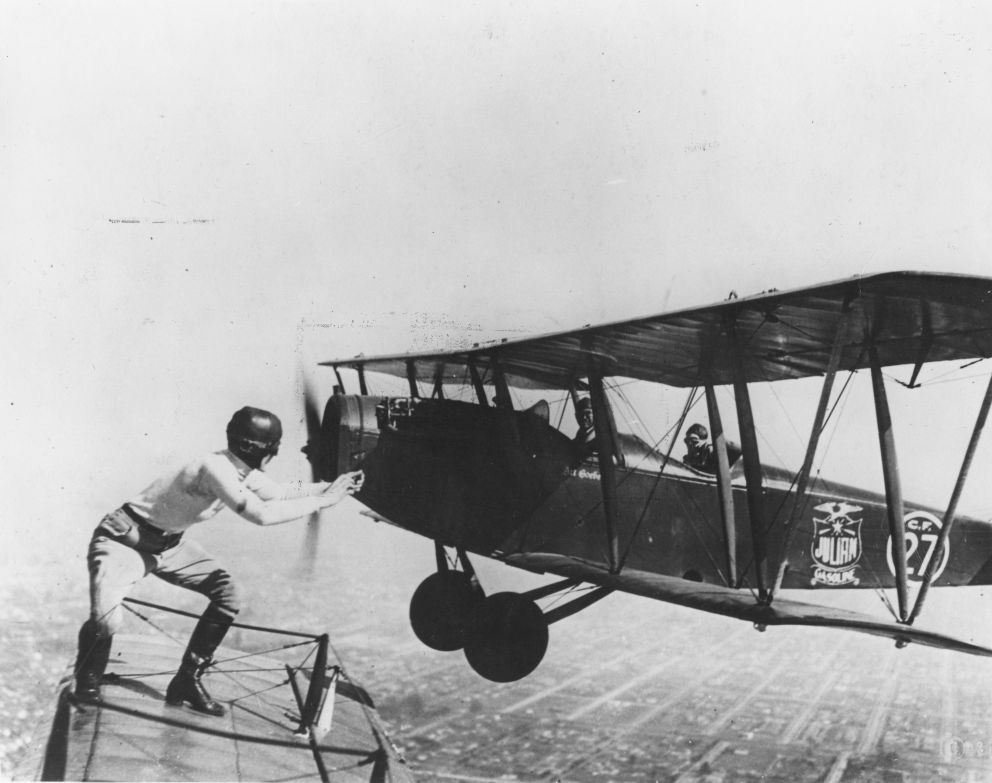 Gladys Ingle is preparing to "change" from Bon MacDougall's Jenny to Art Goebel's Jenny, January 1926. During her career, Gladys made more than 300 plane changes without a slip. She retired and raised a family. 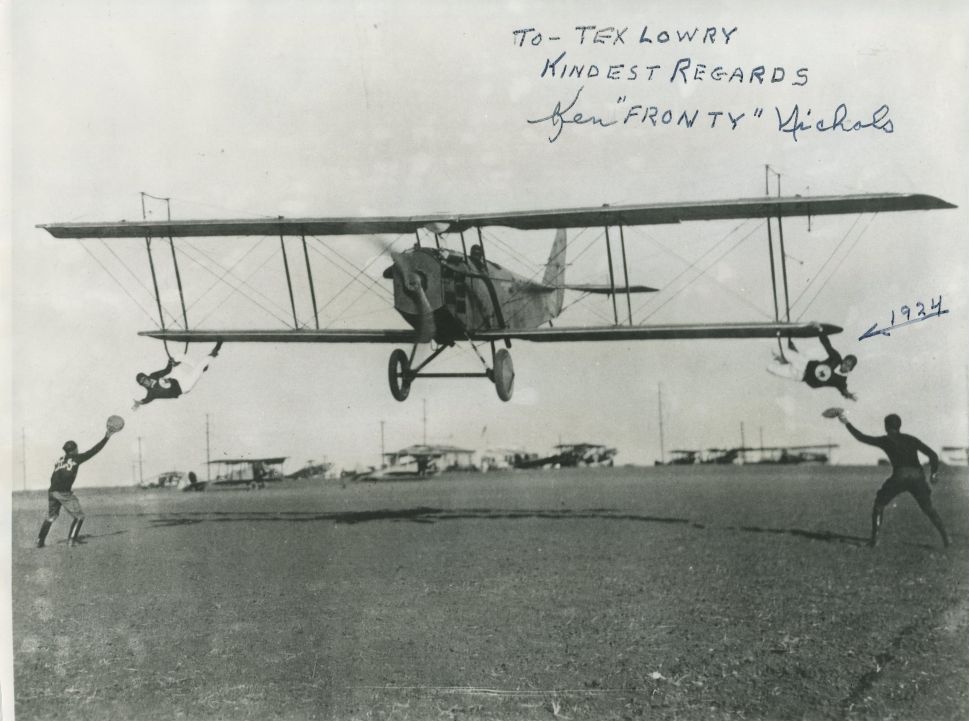 Two Black Cats hanging from the lower wing skids are about to snatch up objects from the two people on the ground. Inscription reads, "To Tex Lowry, Kindest Regards, Ken ‘Fronty’ Nichols.” 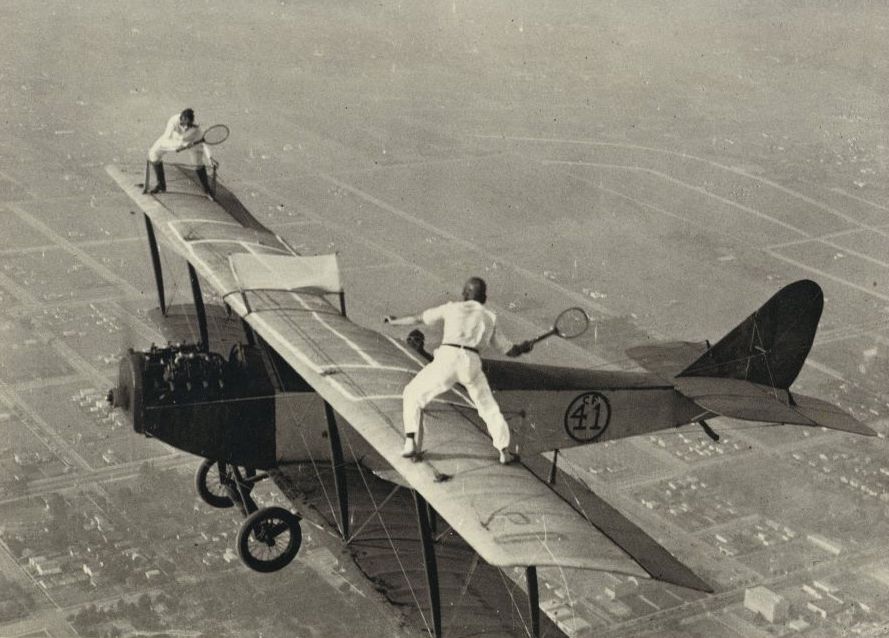 Black Catters Ivan "Bugs" Unger and Gladys Roy enjoy a game of tennis on the upper wing of a Curtiss Jenny.

The 13 Black Cats charged one hundred dollars for an ordinary plane-change. It cost five hundred dollars to make a change made from an upside-down aircraft to one flying right side up. A crowd thrilling addition was a faked accident with the apparent victim falling off the aircraft and tumbling about four hundred feet before a thin cable (invisible to the audience) suddenly opened a hidden parachute, to the gasped relief of the audience. The Black Cats were the first to develop a set scale wage for aerial stunts, which provided a model for the first movie stunt pilots’ union, founded by aviatrix Florence Lowe “Pancho” Barnes (1901-1975) in 1931. 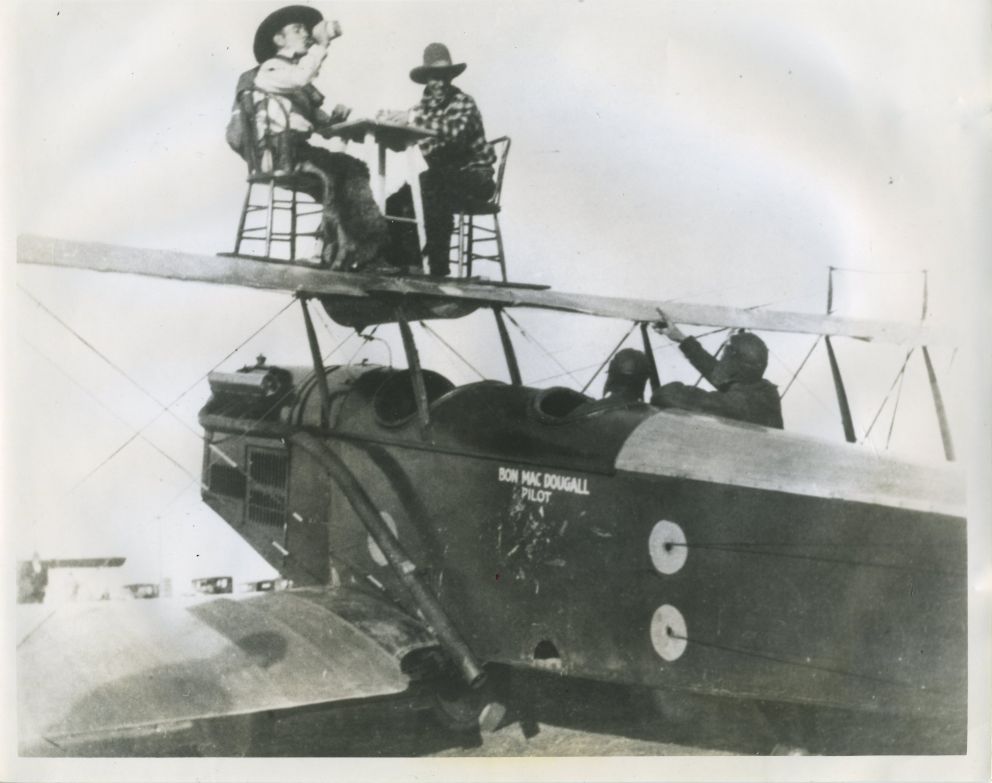 Bon MacDougall pilots the plane with Jack Frye pointing to "cowboys" Al Johnson (drinking from a bottle) and Ken "Fronty" Nichols who seem to be playing a friendly game of cards on the upper wing. But a quarrel over cheating breaks out and a shoot-out causes the loser to tumble off -- before his parachute opens, 1925.