Lincoln Beachey – the “Daredevil of the Air,” the “Genius of Aviation,” the “Divine Flyer” – was the ultimate aerial performer. After the Air Meet at Dominguez Field, he toured the country to entertain – no, to DAZZLE spectators with his stunning aerial acrobatics. In November 1913, Beachey was in San Diego preparing for an exhibition at the Coronado Polo Grounds and made his first aerial loop. A few days later, he looped three times before more than 10,000 paying spectators. 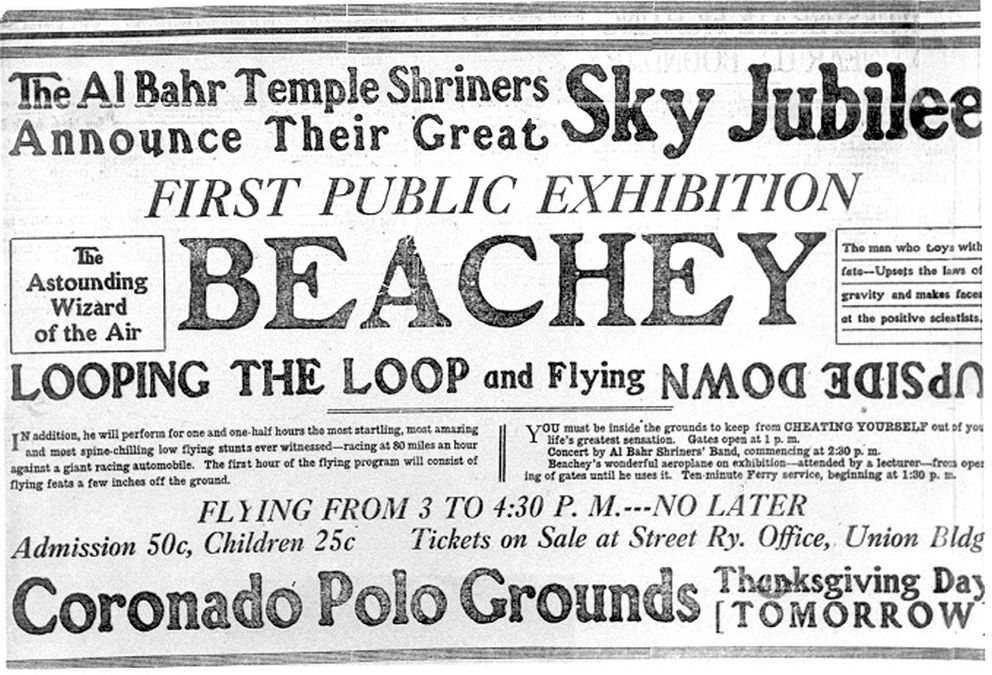 This advertisement in the San Diego Union describes Beachey’s upcoming performance at the Coronado Polo Grounds as the “most amazing and most spine-chilling low flying stunts ever witnessed – racing at 80 miles an hour against a giant racing automobile.” November 1913. 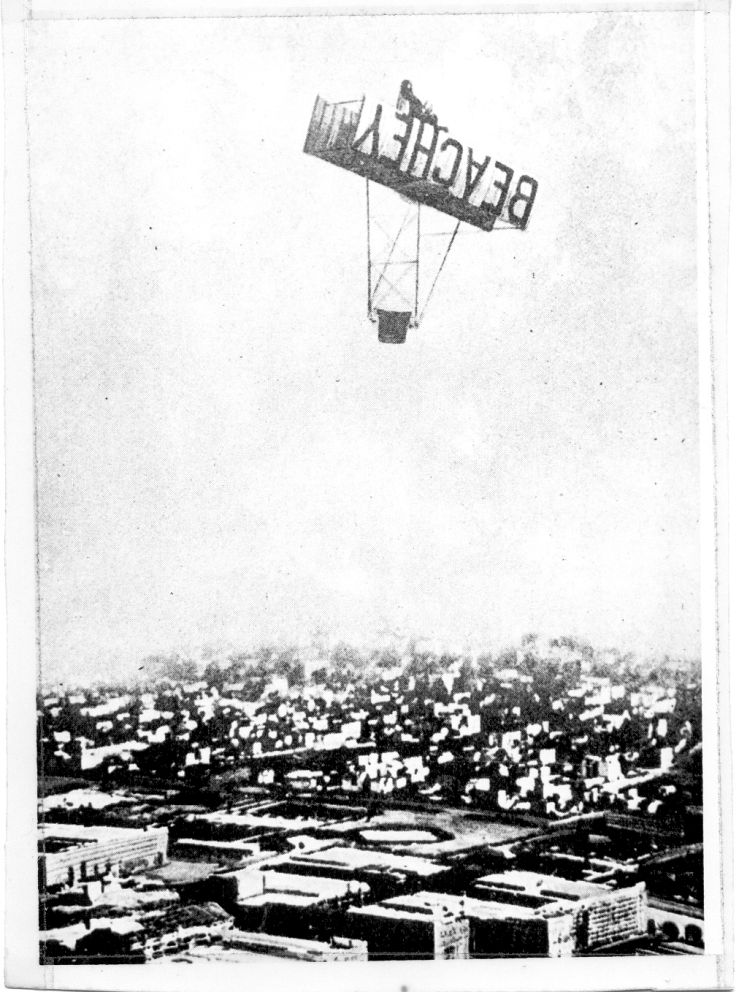 Lincoln Beachey in a dive. On November 18, 1913, he became the first American to fly upside-down and to make sure everyone knew that, he had his name painted in bright red on the top wing, so it was visible when he performed his famous loops and dives.

Millions had seen Lincoln Beachey perform. Although he despised the crowds, he inspired a whole new generation of aviators – both men and women – to vie for the spotlight. Glenn Martin, Arch Hoxsey, Harriet Quimby, Ruth Law, and the Stinson family – Katherine, Marjorie, Eddie, and John – were some of the better-known pilots. At about this time, the box-kite pusher biplanes with the rear-facing engines were being replaced by the more maneuverable tractor-configured planes, with the enclosed fuselage and front-mounted engines. 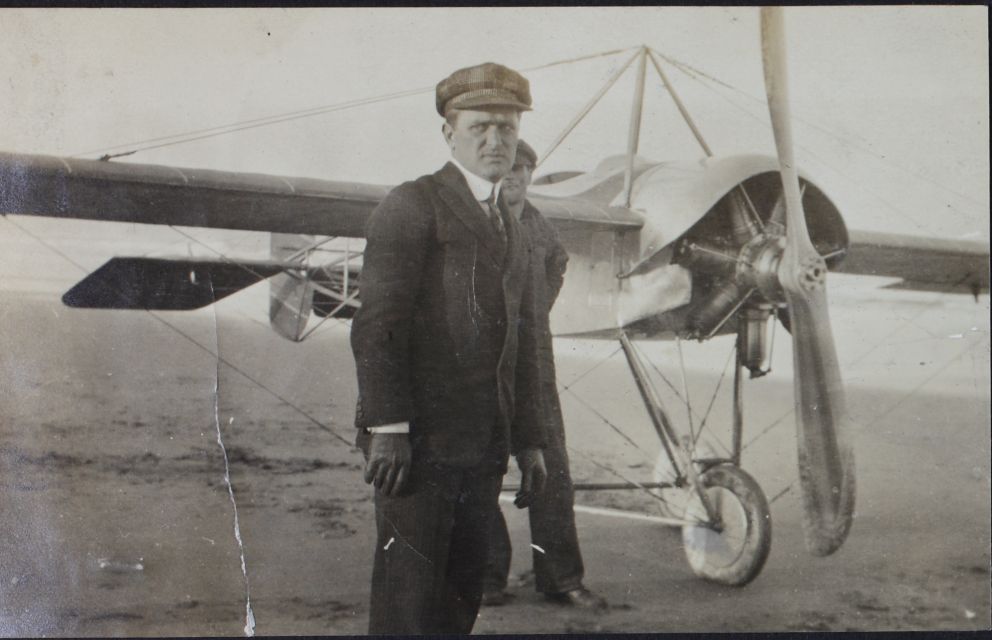 Lincoln Beachey with his modern, new plane, the Beachey-Eaton Monoplane, built by his friend and fellow barnstormer, Warren Eaton. 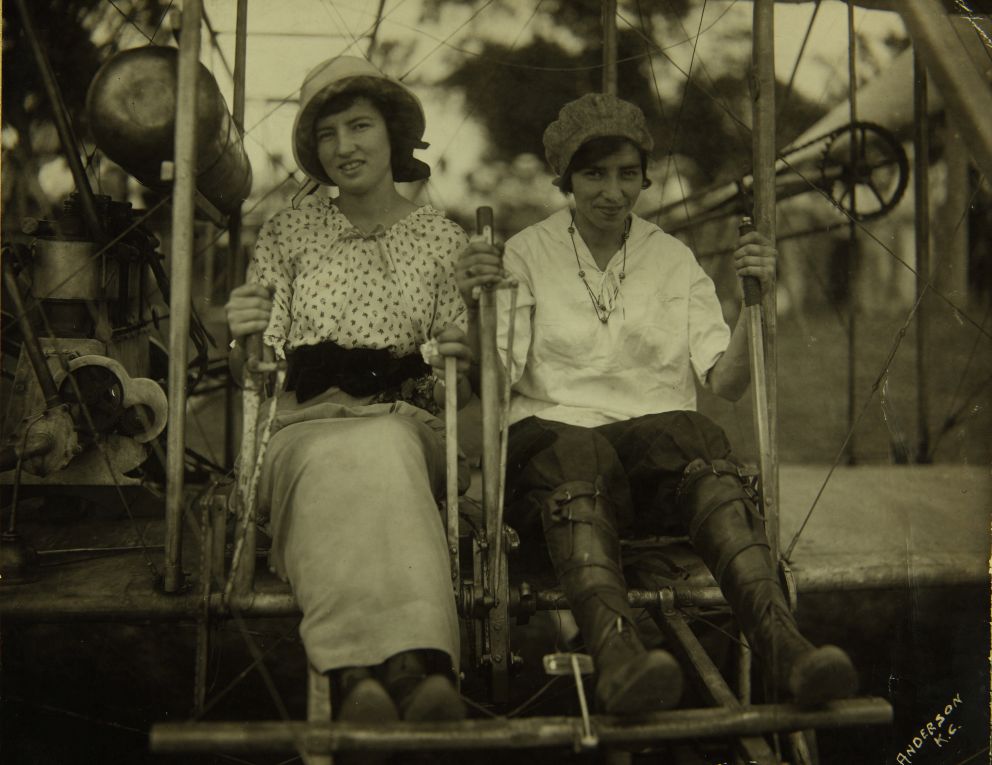 Marjorie (left) and Katherine Stinson in their Wright pusher plane. Katherine acquired the Gnome rotary engine from Beachey’s plane after his deadly crash in San Francisco.

Lincoln Beachey’s final flight was on March 14, 1915 at the Panama-Pacific International Exposition. An estimated 250,000 people watched as the wings on the Beachey-Eaton Monoplane collapsed while in an inverted position, 2000 feet above San Francisco Bay. The rear spars broke causing the plane to plunge and embed it in 30-feet of mud and water. The autopsy reported that Beachey was still strapped into his seat and died from drowning.