Barnstormers introduced aviation to the public on a broad scale. From 1922 to 1928, the Gates Flying Circus alone had performed in every state of the Union, carrying up to 750,000 passengers. Considering the hundreds of large and small flying circuses, plus free-lancers working across the country, as many as 20 million people experienced aviation for the first time during the 1920s, either as participants or spectators. Simultaneously, the movie industry was booming in Hollywood, and film producers took notice of the zealous popularity of flying and incorporated daredevil flight scenes into their movies. Professional movie stunt-pilots soon became a hot commodity, especially when the federal government started to enforce new safety requirements on dangerous aerial stunts performed by flying circuses. The role of professional stunt pilot soon became a lucrative career transition for some former barnstormers. The silent 1927 aviation-related war film "Wings," directed by William A. Wellman, was the first movie (and only silent film) to win the Academy Award for Best Picture. 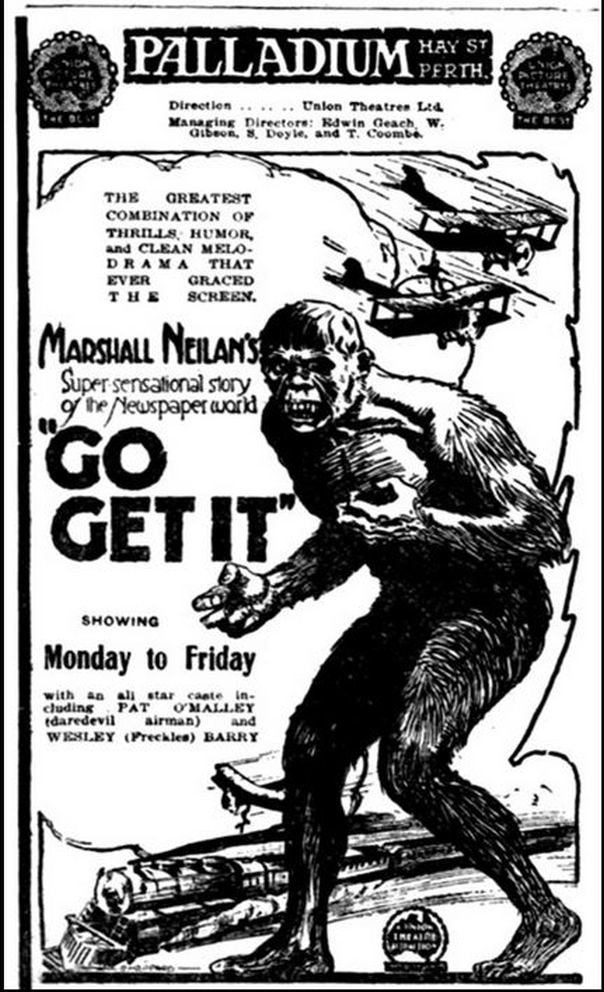 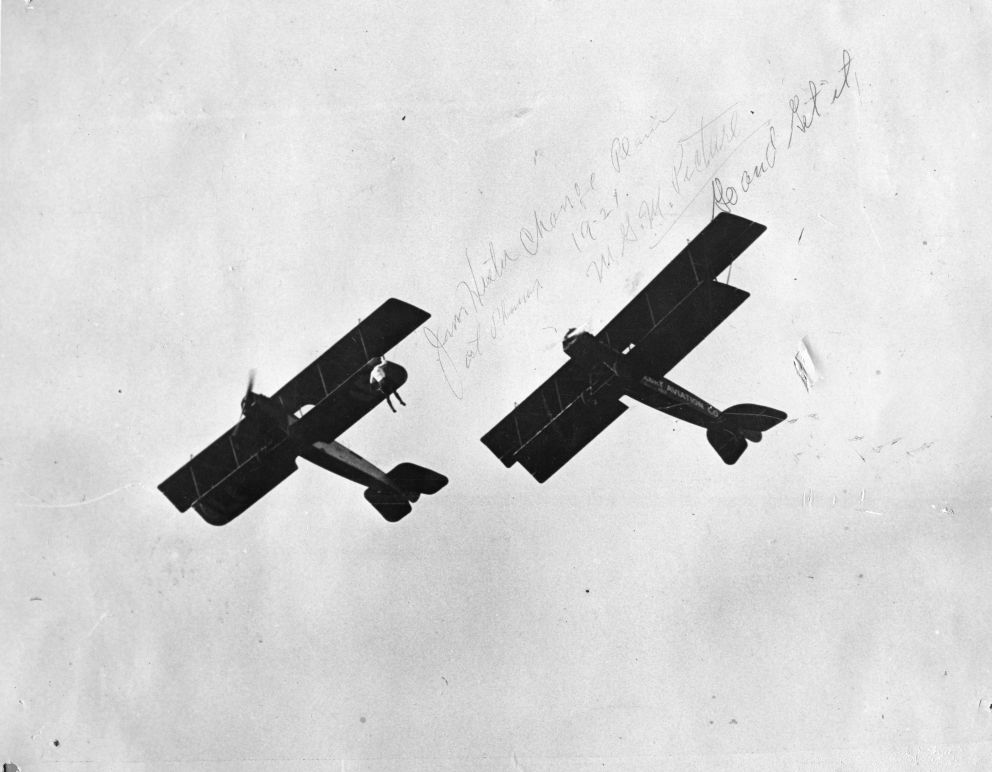 Following Omer Locklear, Frank Clarke (1898-1948) was the next major Hollywood stunt pilot to gain prominence. In 1921, Clarke performed a particularly risky stunt for the film “Stranger Than Fiction” when he flew a Curtiss JN-4, with a 150 hp L-4 Liberty engine, off the roof of the 10-story Los Angeles Railway building. The plane took off from a 100-foot runway made of wooden planks at 90 mph and almost dropped to the street below before Clarke gained enough power to level it off. During the early 1920s, Frank Clarke often worked together with his friend and fellow exhibition pilot, Wally Timm (1896-1978), who was the younger brother of Otto Timm (1893-1978). On a local side note, in 1916, Otto Timm was a senior flight instructor at Rockwell Field in San Diego. After the war, he became chief engineer at the Lincoln-Standard Aircraft Company in Lincoln, Nebraska. In 1922, Charles Lindbergh and his friend, Bud Gurney, visited the factory, and Otto Timm gave the two young men their first airplane ride. 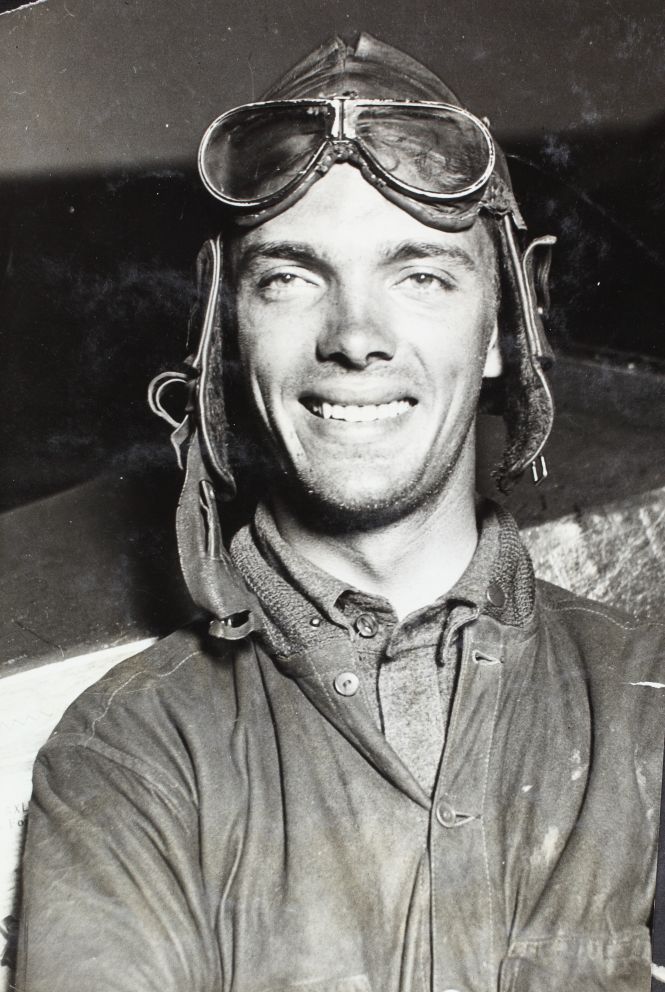 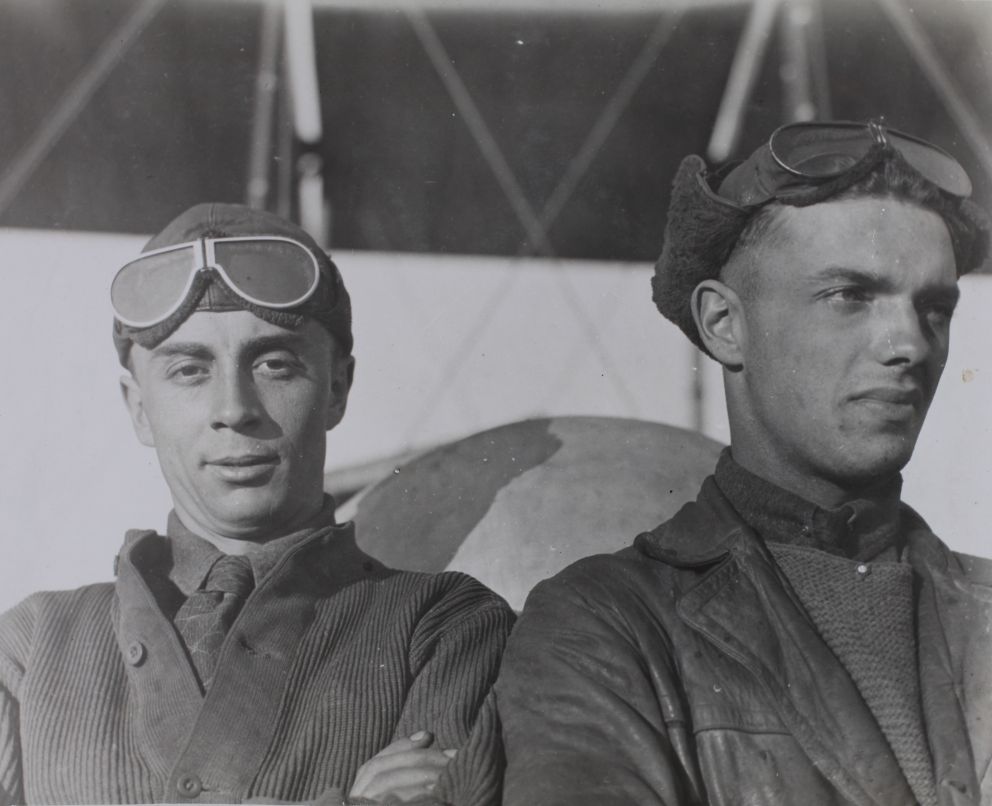 They dynamic duo of Wally Timm and Frank Clarke. 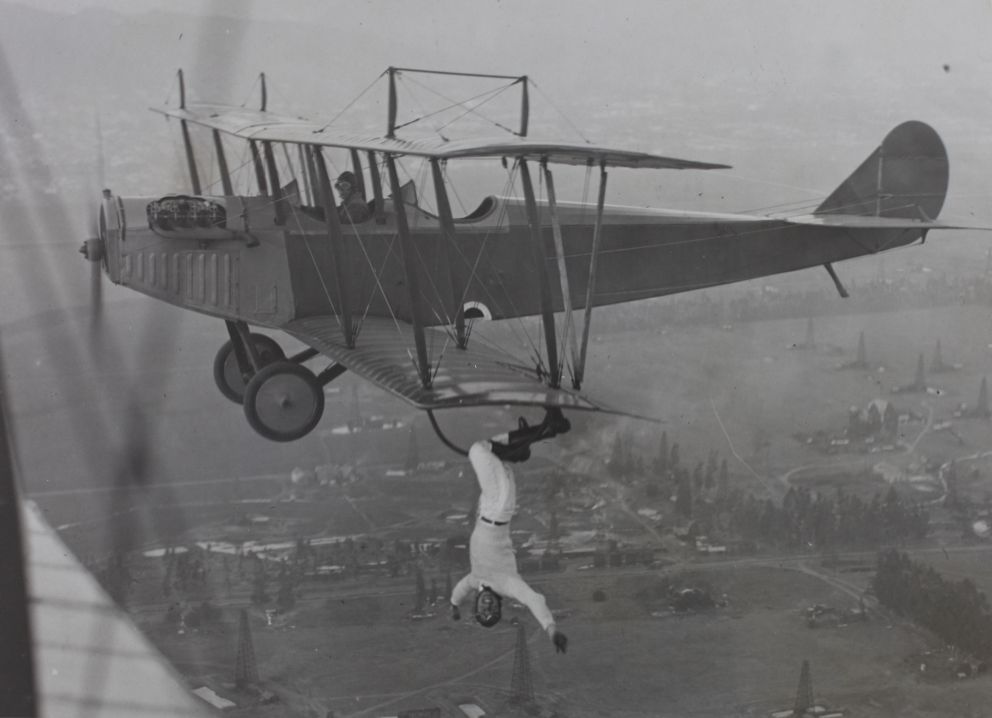 Wally Timm flying a Curtiss Jenny with wingwalker Al Wilson dangling by only his legs wrapped around the lower wing skid. 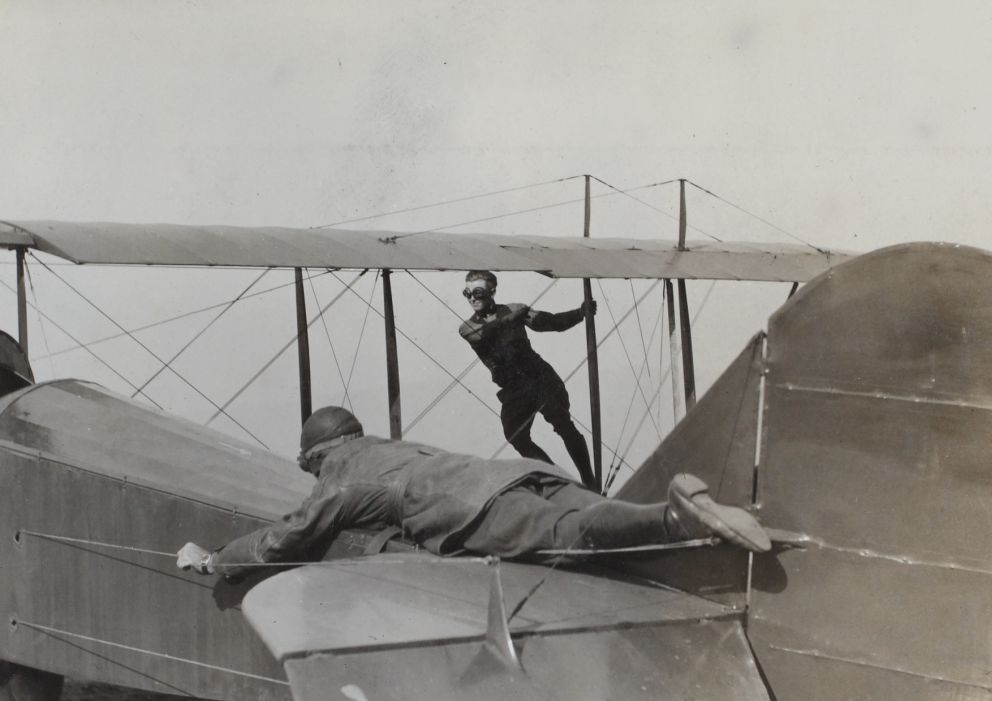 Frank Clarke driving from the tail -- and not in the cockpit! There is a rope tied to the control stick that he pulls on, like reins on a horse. 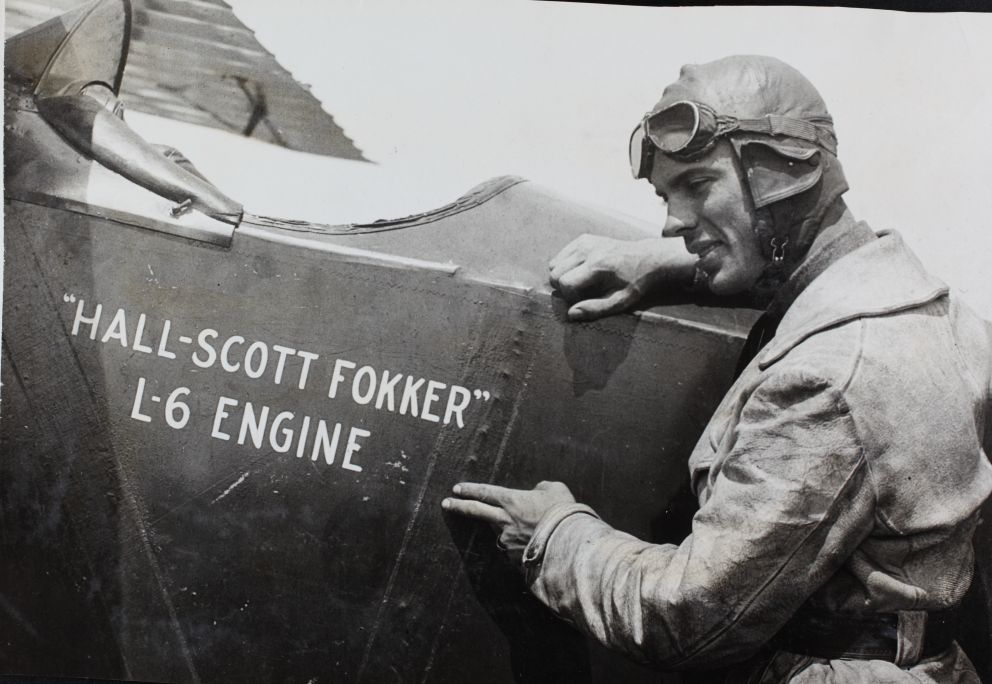 Frank Clarke points out the wording "'Hall-Scott Fokker' L-6 Engine" painted on the side of a Fokker D.VII given (or loaned) to the Hall-Scott engine company to adapt it for use of their 200 hp L-6 engine. 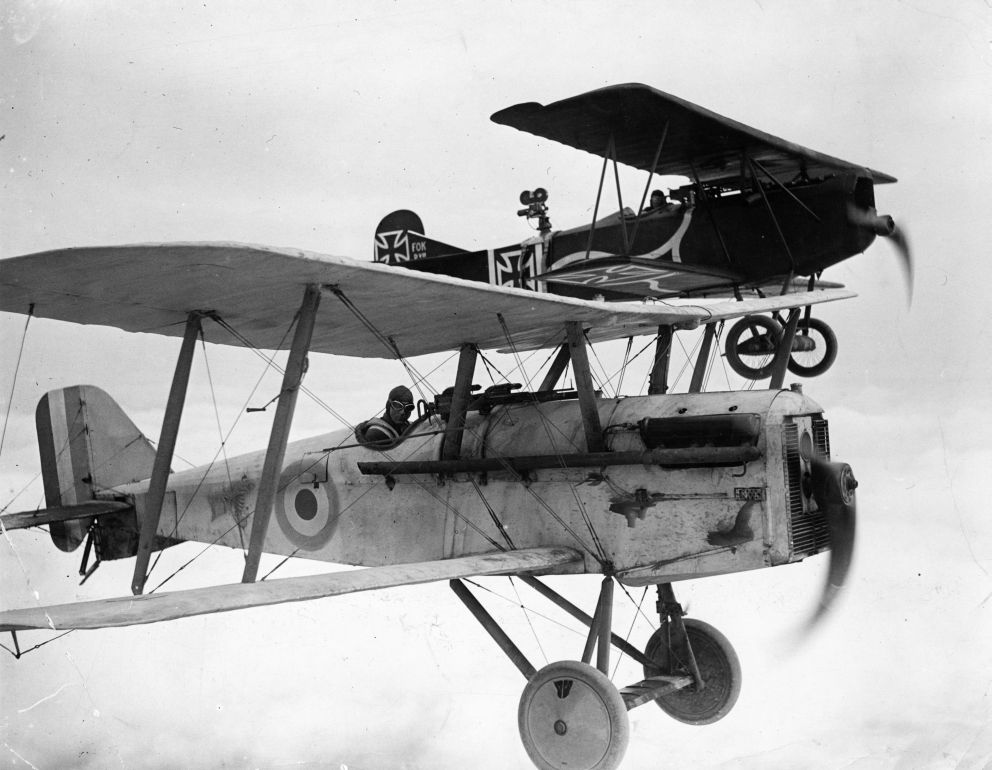 Ray Wilson flying the S.E.5 and Frank Clarke is flying his Fokker D.VII for the filming of Howard Hughes's silent movie, "Hell's Angels," 1928. Both planes are genuine World War I aircraft, modified for movie use. A camera is mounted on the Fokker and U.S. style machine guns are on the S.E.5.