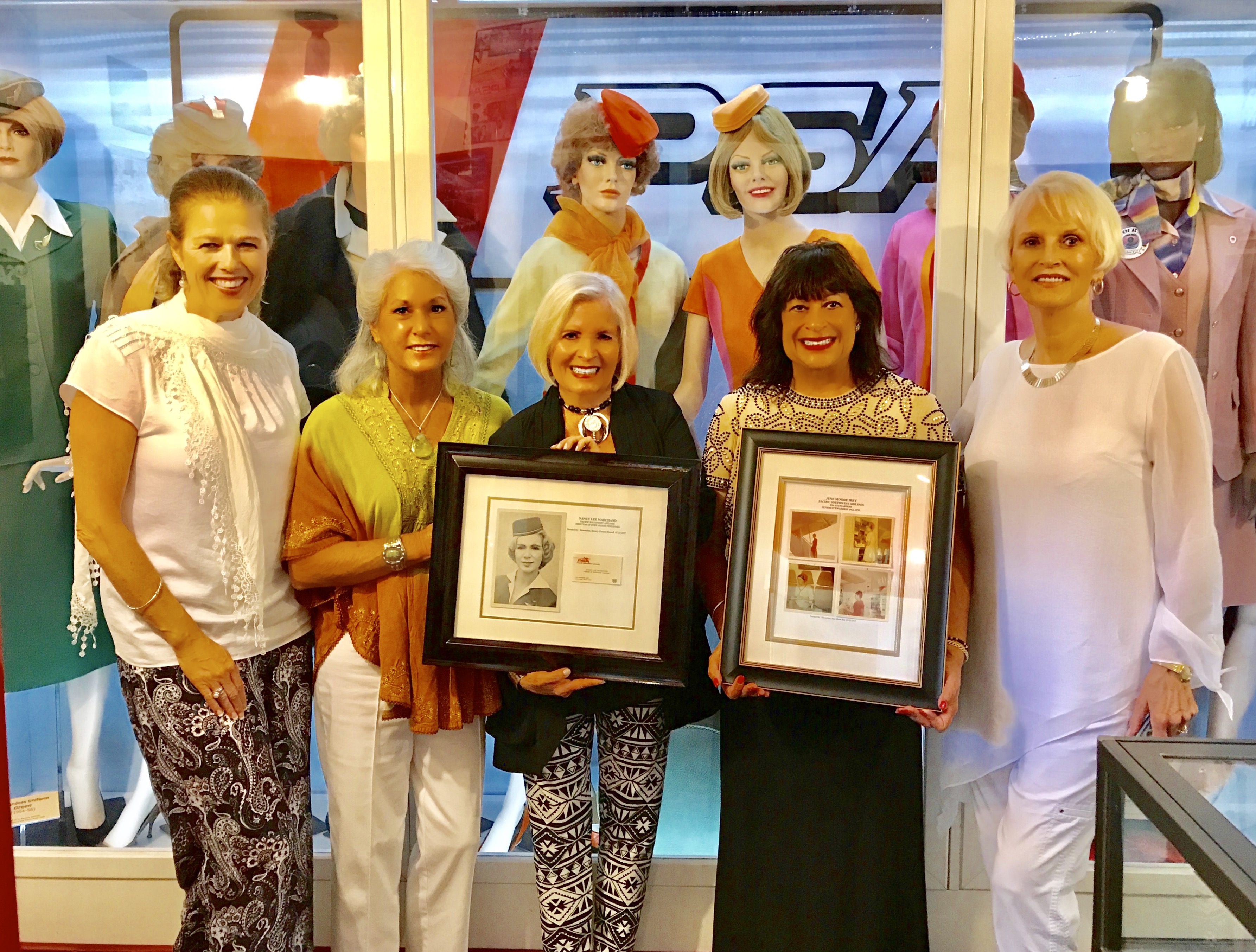 San Diego’s rich aviation history is like no other in American lore. Some of the greatest names in aviation -- Consolidated, Convair, “The Spirit of St. Louis,” Reuben H. Fleet, the Atlas Missile Project, Naval Aviation, Northrop Grumman, General Atomics, John J. Montgomery, Bill Gibbs, to name a few – all trace their roots to San Diego.

As does one of the most successful regional airlines in American history; Pacific Southwest Airlines.

With its low fares and friendly service, and distinctive orange, red, and white planes complete with a beaming smile, PSA was immediately recognizable to those living on the West Coast. Kenny Friedkin, the founder of PSA, started in 1949 with one leased DC-3 and expanded his fleet to serve millions of passengers each year. Although PSA is no longer in operation, its successful business model of low-priced, efficient service was copied by other airlines and today is considered the norm.

The story of PSA starts with Friedkin, a seasoned aviation instructor who operated a flight school at Lindbergh Field in San Diego after World War II called the Friedkin School of Aeronautics. After a few successful years of instructing veterans, the flight-school business began to slow down. Looking for other business opportunities, in 1949 Friedkin made the fateful decision to start an airline. On May 6, 1949, a DC-3 taxied down the runway headed for Oakland, California, and a legend was born. (Friedkin entered the International Air & Space Hall of Fame at the San Diego Air & Space Museum in 2015. Click here to view his bio and induction video.)

Despite it official name -- Pacific Southwest Airlines -- because so many navy men from San Diego flew on it, PSA soon would be garner the nickname the “Poor Sailor’s Airlines.” 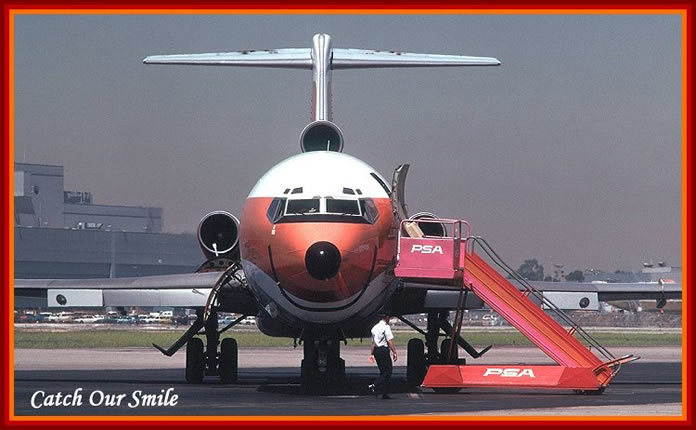 From the start, PSA’s business model was to offer low fares and quality service, exemplified in its first advertising slogan as “the World’s Friendliest Airline.” The model caught on, and soon PSA attracted more passengers than just sailors. The airline grew, both in terms of aircraft and destinations. Besides the flights from San Diego to Oakland, routes to Burbank and San Francisco were added. PSA was now in real competition with major carriers like United Airlines and Trans World Airlines (TWA), in some instances offering flights at half the cost.

Additional DC-3s were followed by 70-passenger DC-4s in the mid-1950s. It was during this decade that PSA started to earn the reputation for only hiring single, attractive stewardesses.

The next decade began with the introduction of an airplane that would become a PSA icon: The Lockheed Electra L-188. Although the 1960s was a decade of incredible growth, it began with a great loss as founder Kenny Friedkin passed away in 1962. Longtime PSA employee J. Floyd Andrews took over as president, a capacity in which he would serve until 1976. Another major event occurred in 1962, when PSA welcomed its one-millionth passenger.

Growth and innovation were the themes of the first half of the 1960s, with PSA operating a new engine overhaul shop and pilot training center; in addition, an automated phone-reservation system was put into service. Perhaps the biggest indication that PSA was coming of age was the addition of the 727 jet airliner in 1965.

The latter half of the decade showed even more impressive expansion: New routes and aircraft, and a new 185,000-squre-foot administration and hangar complex. However, some might argue the most important introduction PSA made in the 1960s was the unveiling of the first miniskirt stewardess uniform in 1966. The decade closed with the introduction of the famous smile on each PSA airplane, cementing in people’s minds that PSA truly was the “World’s Friendliest Airline.” 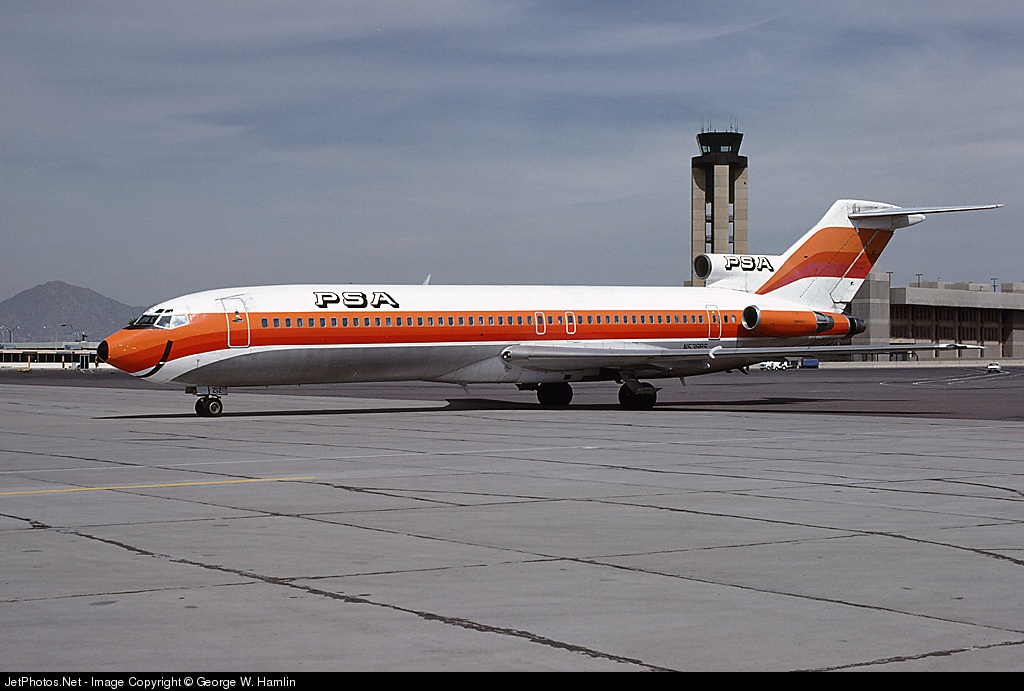 If the 1960’s was a decade of rapid growth, the 1970s was an era of success mixed with pitfalls. Spreading its wings, PSA ventured into the hotel and rental-car business. More routes were added and additional passengers were attracted to PSA, with each year setting new records. So confident were the PSA executives that they negotiated a contract for five Lockheed L-1011 wide-body jets. Unfortunately, a rise in fuel costs, coupled with a slow economy, doomed the L-1011 venture, with only one seeing limited service with PSA.

Yet the new president of PSA, Bill Shrimp (who was only the third to hold that position in the 25-year history of the airline up to that time), was able to weather the turbulent times, and soon both revenue and profits soared. With the Airline Deregulation Act of 1978, PSA finally was allowed to open routes to other states besides California. Soon PSA was servicing Nevada, Utah, and Arizona.

For all of the ups and down of the 1970s, the event involving PSA that would impact the minds of most Americans occurred on September 25, 1978. It was a warm Monday morning when PSA Flight 182 collided with a Cessna 172 over San Diego, killing 144 people on the ground and in the air. Of those who died, 37 were PSA employees, which sent a shock wave through the airline’s family, However, the airline quickly recovered, closing out the decade with record profits and passenger totals for 1979. 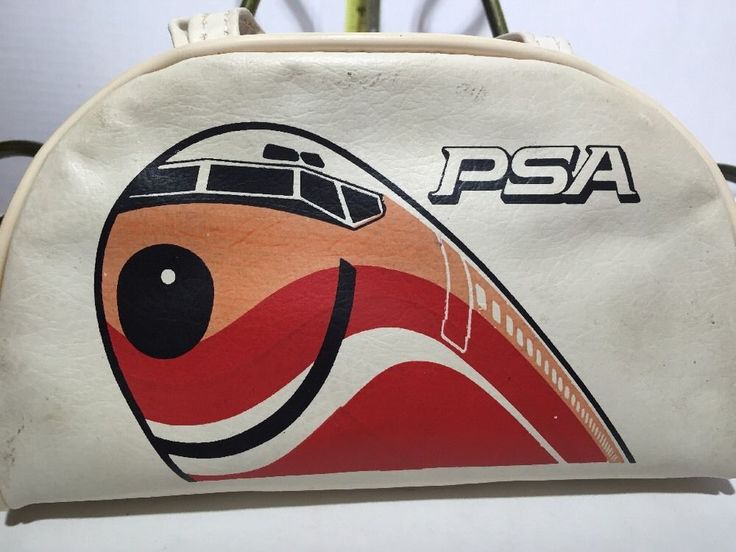 Perhaps a forbearer of what the 1980s would bring was the airline pilot strike of 1980, which lasted 52 days. Although settled relatively quickly, the strike perhaps indicated that the airline had outgrown its roots as a small organization where everyone worked together and made sacrifices. Yet revenue continued to grow for the first years of the 1980s, and with the introduction of new DC-9 Super 80 aircraft and the BAE 146-200, the number of total passengers rose as well. Even more routes became available, including destinations in Oregon and Washington state. PSA even had flights to Mexico, making it an international carrier.

However, 1983 proved to be a very bad year for PSA, as the airline lost money. It soon became apparent that the trend of airlines merging and increased competition might be too much for PSA to overcome. The era when an airline could offer low-cost fares and still provide friendly service had come and gone. As the decade drew to a close, the airline was sold to US Airways, and the last PSA flight took off on April 8, 1988.

However, the legacy of Pacific Southwest Airlines did not end there. The memories of those who worked for and flew on the smiling PSA jets live on. For years, former employees would gather and recollect about the times they had at this unique company, which truly was a family. In addition, many people credit PSA as being the inspiration for successful airlines operating today, such as Southwest, which offers discount fares and friendly service.

Click here to purchase a copy of Pacific Southwest Airlines. 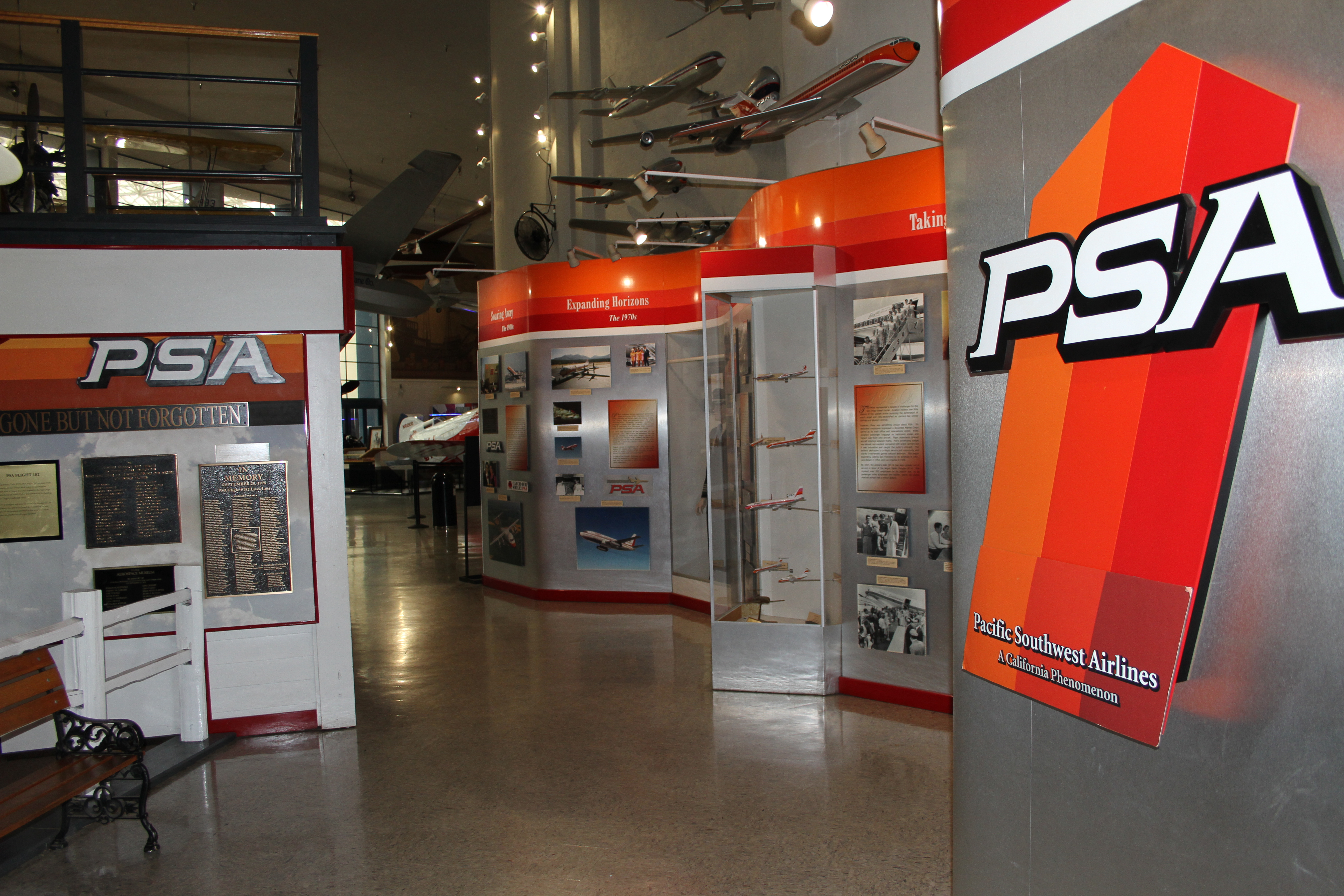 The PSA exhibit at the San Diego Air & Space Museum.