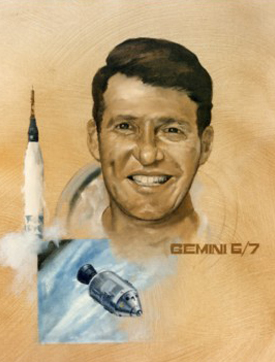 Pride in his father's accomplishments as a pilot in World War I led Walter Marty Schirra, Jr. to develop an intense interest in aviation. He graduated from the United States Naval Academy in 1945 and became a naval aviator in 1948. As a fighter pilot in Korea he flew 90 combat missions and downed two MiGs. After Korea he took part in the development of Sidewinder missiles at the Naval Ordnance Test Station, then returned to the fleet and introduced the air-to-air missiles to operation squadrons. He was project pilot for the development of the F-7U Cutlass aircraft. He attended the University of Southern California and then completed test pilot training at the Naval Air Test Center, Patuxent River, Maryland. It was from this background that Wally Schirra was chosen with the first group of U.S. astronauts on April 9th 1959. His first space flight in Mercury Sigma 7 on October 3rd 1962, was a flawless 6-orbit mission. He was command pilot for the Gemini VI-A mission in December 1965, and performed the first rendezvous of two manned maneuverable spacecraft. On his final spaceflight, as command pilot of Apollo VII, Schirra's task on October 11th 1968, was to prove the reliability of the Apollo spacecraft on its first manned mission. He became the only astronaut to have flown as commander in Mercury, Gemini and Apollo programs. He retired from the Navy and NASA, with the rank of captain, in July 1969 to enter private business. During a ceremony at the San Diego Aerospace Museum on November 16th 2005, NASA honored veteran astronaut Walter M. Schirra, Jr. as an Ambassador of Exploration. Schirra was also presented with a moon rock to recognize the sacrifices and dedication of the Mercury, Gemini and Apollo astronauts. The moon rock remains on display in the museum. Schirra passed away on May 3, 2007.
Inducted in 1970.
Portrait Location: Space Gallery