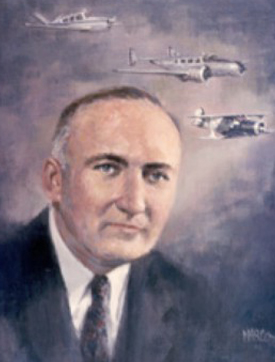 Walter Herschel Beech began his illustrious career in aviation by building a glider of his own design at age 14. Becoming a rated U.S. Army aviator in 1917, he later joined the Swallow Airplane Company, where he quickly rose from test pilot to general manager. In 1924, Walter Beech and Clyde Cessna co-founded Travel Air Manufacturing Company, which was to become the world's largest producer of both monoplane and biplane commercial aircraft. They received international acclaim by establishing more than 200 performance records. Upon the merger of Travel Air with the Curtiss-Wright Airplane Company, Walter Beech became president of this new corporation. His continued desire for a more personal participation in aircraft design and manufacture led him to so co-found the Beech Aircraft Company with his wife, Olive Ann, in 1932. These early Beechcrafts set many distance and speed records and won the prestigious Bendix and McFadden races. Perhaps the most novel among these, with design and performance features years ahead of their time, was the Model 17 Stagger Wing biplane. During World War II, Beech turned his entire production line to military defense, producing over 7,400 military aircraft. The famed twin Beech AT-7/C-45 trained over 90 percent of the U.S. Army Air Forces navigator/bombardiers and 50 percent of the multi-engine pilots. In the post-war years, Walter Beech again applied his design genius to producing a new line of light aircraft, the most famous of which was the "V" tailed Bonanza. Beech Aircraft Company remains a leader in the design, development, and production of personal, corporate, and military aircraft. They are also involved in continuing space research.
Inducted in 1982.
Portrait Location: Near R-44 and B-5 Brougham