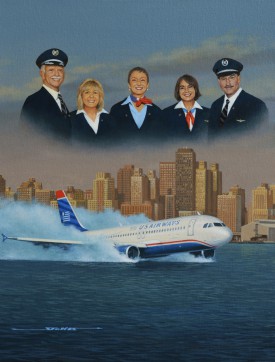 On January 15, 2009, a day everyone remembers,155 passengers and five crew members aboard US Airways Flight 1549 survived an emergency landing into the Hudson River. Shortly after take-off from La Guardia Airport, the Airbus A320 struck a flock of geese that blew out both engines of the aircraft. Capt. Chesley "Sully" Sullenberger's clear, steady voice told passengers, "Brace for impact," and—seconds later—the plane was in the Hudson River taking on water. From the mental preparedness and sound judgment of Capt. Sullenberger and Co-Pilot Jeff Skiles in the cockpit, to the leadership and selflessness of Flight Attendants Doreen Welsh, Sheila Dail and Donna Dent in the interior, the crew and passengers of US Airways Flight 1549 miraculously survived a catastrophe.
Inducted in 2013.
Portrait Location: Hall of Fame Hallway