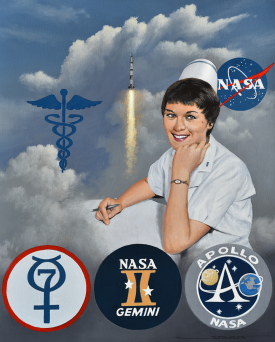 In 1959, Dee O’Hara became the first aerospace nurse assigned to NASA’s first seven astronauts -- Alan Shepard, Gus Grissom, John Glenn, Scott Carpenter, Wally Schirra, Gordon Cooper, and Deke Slayton – known as the Mercury Seven. Since then, O’Hara participated in every launch in the Mercury, Gemini and Apollo programs. It was Dee’s job to assist in the countless, complicated tests and checks, pre- and post-flight medical exams, collection of data, and maintain all of the medical and FAA records for each of the astronauts, allowing her to establish the foundations for the field of Space Nursing. After Skylab, she was invited to participate in the Apollo-Soyuz Test Program (ASTP) and the first shuttle flight in 1981. In 1974, O’Hara moved to the Ames Research Center where she managed the Human Research Facility until her retirement in 1997.
Inducted in 2021.
Portrait Location: Not Currently on Floor