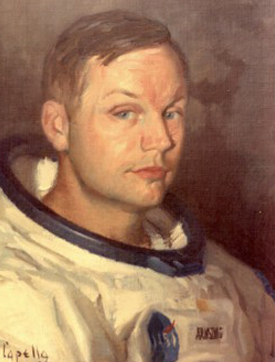 Born August 5, 1930, in Wapakoneta, Ohio, Neil Alden Armstrong became a naval aviator in 1949 and flew 78 combat missions in the Korean War. He received a degree in aeronautical engineering from Purdue University in 1955. In 1955 Neil Armstrong became a research test pilot for NASA. He was assigned to the prestigious X-15 program, flying this aircraft to the fringes of space at an altitude of over 200,000 feet and at 4,000 miles per hour. In 1962 he was selected as a U.S. astronaut, serving as backup pilot on the Gemini V flight, and as command pilot on the 1966 Gemini VIII flight which performed the first successful docking of two spacecraft. As spacecraft commander for Apollo XI, the first manned lunar landing mission, Armstrong was the first man to walk on the Moon. “That’s one small step for a man, one giant leap for mankind.” With these historic words, man’s dream of the ages was fulfilled. With the exception of Charles Lindbergh’s epic flight in 1927, no event in history has so captured the imagination of all men. Millions were watching as the voices and ghostly figures of Apollo XI were broadcast live from the moon, 250,000 miles away. Neil Armstrong left NASA in 1971 and became Professor of Aerospace Engineering at the University of Cincinnati. Armstrong passed away on August 25, 2012, at the age of 82.
Inducted in 1971.
Portrait Location: Space Gallery