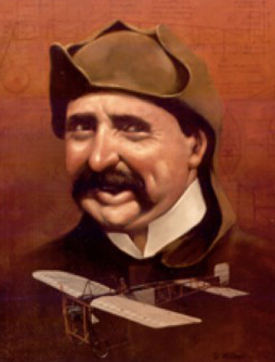 Louis Bleriot graduated with a degree in arts and trades from Ecole Centrale Paris. After successfully establishing himself in the business of manufacturing automobile headlamps, he began his lifelong dedication to aviation at age 30. In 1907 he made his first flight at Bagatelle, France, in an aircraft of his own design. He taught himself to fly while improving his designs by trial and error. In only two years his new aviation company was producing a line of aircraft known for their high quality and performance. Louis Bleriot achieved world acclaim by being the first to fly an aircraft across the English Channel, a feat of great daring. On July 25th 1909, in his Model XI, 25-horsepower monoplane, he braved adverse weather and 22 miles of forbidding sea and flew his machine from Les Barraques, France to Dover, England. Upon the successful completion of this 40-minute flight, Bleriot won the much sought after London Daily Mail prize of 1,000 pounds sterling. During World War I, his company produced the famous SPAD fighter aircraft flown by all the Allied Nations. His exceptional skill and ingenuity contributed significantly to the advance of aeronautical science in his time, and popularized aviation as a sport. He remained active in the aviation industry until his death in 1936.
Inducted in 1967.
Portrait Location: Hall of Fame Hallway