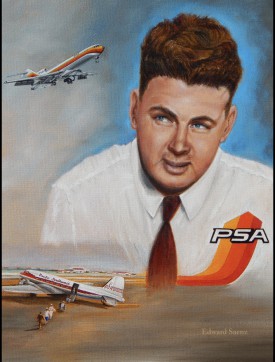 During the 1930s, Friedkin was chief flight instructor at a flying school in Glendale. In 1942 he joined Consairways as a charter pilot, a Consolidated subsidiary, later working as a test pilot for Consolidated in San Diego. After the war Friedkin opened what eventually became the Friedkin School of Aeronautics. Friedkin also offered charter flights. To broaden his operations, Friedkin decided to expand into an airline, establishing Pacific Southwest Airlines, known as PSA, sometimes as "Poor Sailors' Airline," offering flights from San Diego to the Bay Area. On May 6, 1949, PSA made its first DC-3 flight, with service to Oakland; the one way fare was $15.60. At first, PSA only offered weekend flights between San Diego and Oakland, but soon daily flights and a stop in Burbank were added. By 1953 PSA had four DC-3s operating on a daily basis, and carried over 115,000 passengers. New routes were added, including Los Angeles and San Francisco. The DC-3s were replaced by DC- 4s, and by 1959, the L-188 Electra joined the fleet. The 1960s would be a decade of continued growth; however it was also marred by Friedkin's death in 1962. In 1968, the airline transported almost four million passengers and generated over $57M in revenue. After nearly 40 years in business, the little airline that Friedkin created was serving 30 cities in seven Western states, offering more daily flights than Pan Am throughout the world. The fleet had grown to 55 aircraft and served millions of passengers. But in an era of airline deregulation, PSA was sold to USAir. The last PSA flight was on April 8, 1988.
Inducted in 2015.
Portrait Location: Near R-44 and B-5 Brougham