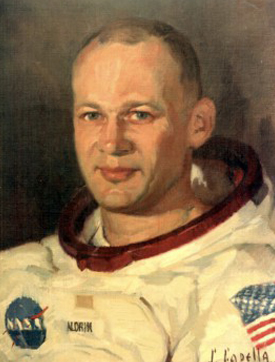 Edwin Eugene Aldrin graduated from the United States Military Academy in 1951 with a bachelor of science degree, became a rated pilot in the USAF by 1952, and received his doctorate of science from Massachusetts Institute of Technology in 1963. "Buzz" Aldrin flew 66 combat missions in the Korean War and is credited with two confirmed victories. After serving as a test pilot and gunnery instructor, he was assigned to the Air Force Academy as assistant to the dean. He entered the space program in the Air Force Space Systems Division where he was selected for astronaut training. Aldrin's first space flight was on the November 11th 1966 Gemini XII mission where he performed a rendezvous with a previously launched satellite and spent a record five and a half hours outside the spacecraft in extravehicular activity. As part of the historic July 16-24, 1969 Apollo XI first moon landing mission, he became the second man to walk on the moon when he followed Neil Armstrong to the surface on July 20th, spending two hours and 15 minutes collecting surface samples and deploying experiments. He piloted the Eagle back into space to rendezvous with the parent Apollo spacecraft Columbia for return to earth. Colonel Aldrin has logged over 289 hours in space flight. Colonel Aldrin retired from NASA and the Air Force in 1972. Dr. Aldrin has remained at the forefront of efforts to ensure a continued leading role for America in manned space exploration and has become a successful businessman and author.
Inducted in 1971.
Portrait Location: Space Gallery