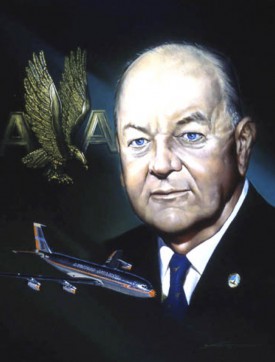 Cyrus Rowlett "CR" Smith became founding president of American Airlines in 1934. Consolidating routes into a logical network and standardizing the airline's aircraft with a new fleet of Douglas DC-3s, an aircraft that was built to his specifications, American Airlines turned its first profit by 1936. With Smith at the helm this airline was the first to serve New York's new LaGuardia airport. During World War II, Smith helped form the military Air Transport Command (ATC). During his military service, Smith rose to the rank of major general and served as vice commander of the ATC. Smith built an organization which became the largest airline in the world by the end of the war. The ATC had more than 200,000 military men and women serving in this organization. After the war, Smith worked with Douglas to develop the DC-6. He also worked with Boeing to enlarge its original B-707. Ordering many of the new jet transports, he brought American Airlines into the jet age. Smith also introduced SABRE, the world's first real-time computerized reservation system. In 1968, Smith served on President Lyndon Johnson's cabinet as Secretary of Commerce. In 1973 he returned to American Airlines as chairman of the board and chief executive officer, retiring in 1974.
Inducted in 1996.
Portrait Location: Hall of Fame Hallway