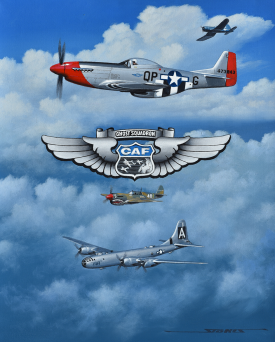 The Commemorative Air Force (CAF), is headquartered in Dallas, Texas, and has over 13,000 members in all 50 states and 28 foreign countries. It is the world’s largest flying museum with the goal to acquire, restore, and conserve combat aircraft in honor of American military aviation. The more than 240 aircraft currently in its fleet – known as the “CAF Ghost Squadron” – fly in air shows and events around the country with the purpose of educating the public about the men and women who have flown and fought for America’s freedom. The organization was originally known as the Confederate Air Force, dating back to the 1940s. However, following a membership vote in 2001 and made effective on January 1, 2002, the organization changed their name to “Commemorative Air Force” to better reflect the mission of the organization. The CAF was founded to acquire, restore and preserve in flying condition a complete collection of combat aircraft that were flown by all military services of the United States, and selected aircraft of other nations, for the education and enjoyment of present and future generations of Americans. Today, their collection of aircraft now ranks as one of the largest air forces in the world.
Inducted in 2021.
Portrait Location: Not Currently on Floor