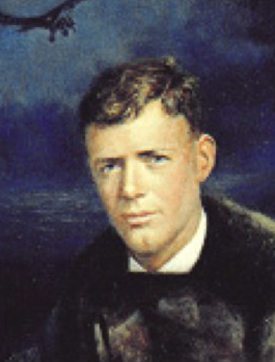 Charles Augustus Lindbergh was born on Feb. 4, 1902 in Detroit, Michigan and became interested in flying while a mechanical engineering student at the University of Wisconsin, leaving the school in 1922 to devote his life to aviation. Working his way through flight school, he purchased a war surplus Curtiss Jenny in 1923 and taught himself to fly. After a year of barnstorming he entered the Army Air Service Flying School and received his pilot's wings in 1925. Returning to civilian aviation, he became an air mail pilot in 1926. His route from St. Louis to Chicago provided him an accelerated accumulation of flying experience at night and in adverse weather. In the early hours of May 20, a cold and rainy dawn broke over Roosevelt Field on Long Island. Equipped with four sandwiches, two canteens of water and 451 gallons of gas, Lindbergh, having already been awake for more than 30 hours, donned the heavy flying suit and climbed into the cramped cockpit of The Spirit. A sodden grass runway made takeoff of the heavily loaded ship difficult. Early hours of the flight were spent flying up the East Coast of the United States and Canada at low altitude. The landfall of Nova Scotia became visible in the eighth hour of flight. Sleep, his enemy, constantly plagued him. An eager world followed the progress of The Spirit and its indomitable pilot who had already been given the name Lone Eagle. Flying by instruments alone, he battled to stay awake. Navigation and fuel management tasks were constant. Dawn came in the 23rd hour of flight, and with it a new vigor. The struggle to stay awake, however, continued. Lindbergh made landfall, the foam lined shore of Ireland, within three miles of his planned course. The English Channel, and then the coast of France, appeared as night fell again. A glow in the darkness ahead became the city of Paris. The Spirit of St. Louis touched down at Le Bourget aerodrome at 10:21 pm local time, May 21, 1927, completing the first flight across the Atlantic in 33 hours, 30 minutes. Upon completion of this epic flight, Charles Lindbergh became the heroic name of the age. No event of aero history so captured the admiration of all men and inspired so many to follow him into the skies. The rest of his life was devoted to the development of commercial aviation, medical research, technical assistance to the military in World War II, and aviation consulting. Lindbergh passed away at the age of 72 on Aug. 26, 1974 in Kipahulu, Hawaii.
Inducted in 1965.
Portrait Location: Theodore Gildred Rotunda