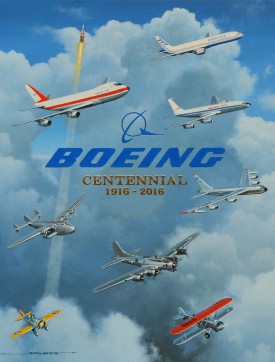 Bill Boeing and Navy engineer Conrad Westervelt founded the Pacific Aero Products Company in Seattle in 1916. When Westervelt was recalled for World War I service in 1917, the company was renamed Boeing Airplane Company. The company designed the Model C for the Navy as a seaplane trainer, also receiving a contract to build 50 Curtiss designed HS-2Ls. Boeing’s long relationship with the military had begun. The post-war period was one of growth for Boeing. In 1919, the first Boeing designed commercial airplane, the B-1 mail plane, was introduced. Between 1919 and 1924, Boeing also modernized almost 300 de Havilland DH-4s. The 1920s would see the company design many aircraft for both military and civilian use, including the PW-9 fighter, the P-12/ F4B fighter, the Model 40, and the Model 80. When the nation entered WWII, Boeing’s aircraft, like the B-17 Flying Fortress, ensured that the country would not lag behind in aerospace technology, with over 12,500 built. The more advanced B-29 played an equally important role in defeating the Japanese, first with bombing campaigns against major Japanese cities, later delivering the two atomic bombs. In the early 1950s, the B-47 and the B-52, long-range, subsonic, strategic bombers, were introduced. In the late fifties, Boeing introduced the 707, which became the most successful early jetliner. More commercial models were introduced, including the 727 and 737, as well as the 1960s most advanced aircraft, the 747, which could hold over 500 passengers. As the century came to a close, Boeing continued to be on the cutting edge of commercial aircraft design, producing the 757, 767 and 777. Major acquisitions were also made, Rockwell in 1996, McDonnell Douglas in 1997 and satellite communications company Hughes Electronics in 2000. Highlights of the 21st century include introduction of the 787 Dreamliner.
Inducted in 2016.
Portrait Location: Near R-44 and B-5 Brougham