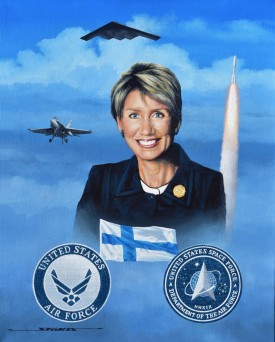 Barbara Barrett is an American businessperson, attorney, and diplomat who served as the 25th United States Secretary of the Air Force. She is former chair of the Aerospace Corporation and a member on the boards of California Institute of Technology, Jet Propulsion Laboratory, RAND Corporation, Smithsonian Institution, Horatio Alger Association of Distinguished Americans, and Lasker Foundation. Barrett is also an instrument-rated pilot, and was the first civilian woman to land in an F/A-18 Hornet on an aircraft carrier. She also trained as an astronaut, and was the backup spaceflight participant for the Soyuz TMA-16 flight to the International Space Station. Barrett has served in senior leadership positions in public service, in the private sector, and in academia. Before she was 30, she was an executive with two global Fortune 500 companies. Her key leadership roles include serving as the U.S. Ambassador to Finland, Deputy Administrator of the Federal Aviation Administration, vice chair of the U.S. Civil Aeronautics Board, and President of the Thunderbird School of Global Management. She also taught leadership as a Harvard Fellow at the Kennedy School of Government. In addition to earning her Juris Doctor degree from Arizona State University, she has also received honorary doctorate degrees from Embry-Riddle Aeronautical University, Thunderbird School of Global Management, the University of South Carolina, Pepperdine University, and Finlandia University.
Inducted in 2020.
Portrait Location: Not Currently on Floor