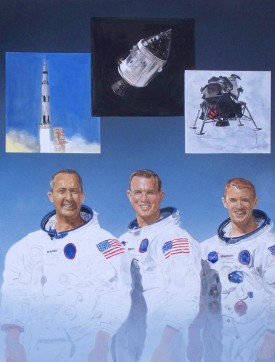 NASA officials, as well as the Apollo program astronauts, recognized that Apollo IX was to be a pivotal mission in the series of flights that would culminate with a man walking on the moon. The flight would test and affirm the capability of the lunar module to separate and re-dock with the Command Module. The lunar lander's functionality would also be tested in a simulated Moon landing, and the crew would test the space suits that would later be worn on the lunar excursions by Neil Armstrong and Buzz Aldrin. Launched in March 1969 on a ten day mission, all that remains of the massive hardware sent into space atop the 363-foot-tall Saturn V launch vehicle is the command module "Gumdrop" now proudly displayed in the Museum's SPACE: Our Greatest Adventure special exhibition. For such a demanding mission, a very skilled crew was assembled, headed by Jim McDivitt, veteran commander of the Gemini IV flight that pioneered external spacewalk activity, among other experiments, that cleared the way for the Apollo program. Joining McDivitt in the lunar lander was pilot Rusty Schweickart, who flew the fragile machine more than 100 miles from "Gumdrop" and successfully re-docked, but not before affirming the functionality of the suit with a lengthy spacewalk. Rounding out the crew was Dave Scott, command module pilot. A veteran of Gemini VIII, Scott would bear the enormous responsibility of re-docking with the lander allowing the transfer of McDivitt and Schweickart back to the command module for the descent to Earth. Later Scott would command Apollo XV and drive the first rover extensively over a three day period gathering scientific samples. Engineers, pilots, scientists, adventurers, the crew of Apollo IX advanced the entire project a number of steps closer to the Moon. Apollo 9 Commander Jim McDivitt passed away on October 13, 2022 at the age of 93.
Inducted in 2012.
Portrait Location: Space Gallery