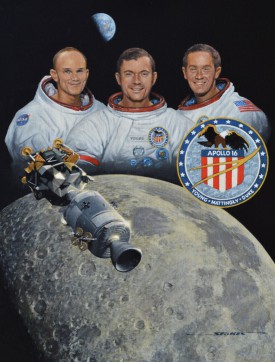 The Apollo 16 mission to the Moon, John Young, Ken Mattingly and Charlie Duke, was America's fifth manned lunar landing, and the first to land in the desolate lunar highlands. Using a lunar rover, Young and Duke spent almost three days exploring the region, making geological discoveries that completely revised scientific thinking about the highlands. In the meantime, Mattingly carried out a mission of lunar mapping and scientific readings from lunar orbit. John Young and Charlie Duke are two of only 12 astronauts who walked on the moon, of which only four are still living as of May 26, 2018.
Inducted in 2013.
Portrait Location: Space Gallery