To the Moon and Back, an Evening with America’s Space Heroes

This event is now Sold Out.

On June 23, 2016, the San Diego Air & Space Museum is offering a rare opportunity to meet not only some of the American heroes who walked on the moon, but also the remarkable people on the ground who helped make mankind’s most extraordinary dream a reality.

On May 25, 1961, President John F. Kennedy issued a national goal to the American people of “landing a man on the moon and returning him safely to Earth within a decade.” President Kennedy’s challenge resulted in an international space race, spurring on previously unprecedented technological advances through the Mercury, Gemini and Apollo space programs. 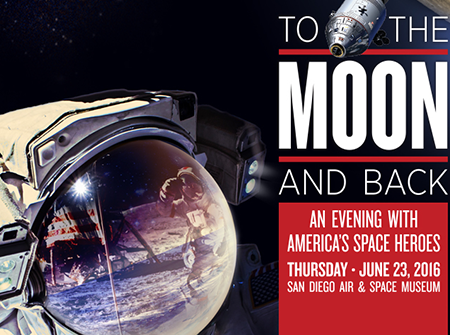 In all, 12 Americans would walk on the moon. The first, Neil Armstrong, took “one small step for man, one giant leap for mankind” on July 20, 1969. Moments later Buzz Aldrin joined him on the lunar surface, successfully accomplishing President Kennedy’s goal of landing a man on the moon before the end of the decade. Six more Apollo missions flew to the moon, with Gene Cernan of Apollo 17 being the last person to ever leave footprints on the lunar surface in December of 1972, making him “The Last Man On the Moon.” 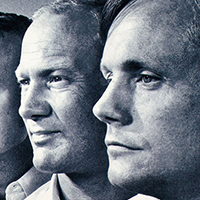 Buzz Aldrin – Apollo 11, Buzz and Neil Armstrong were the first to walk on the moon, July 1969 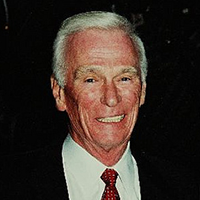 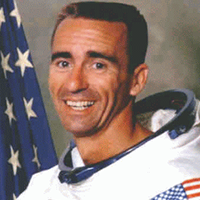 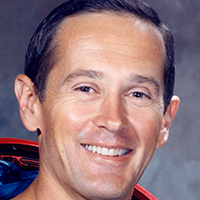 Charlie Duke – Apollo 16, the youngest astronaut to walk on the moon and CAPCOM for Apollo 11 -- the historic first moon landing 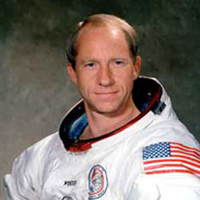 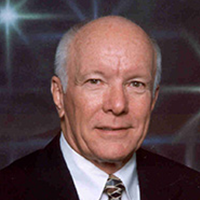 Gerry Griffin – Lead Flight Director for three moon landings -- Apollo 12, 15 and 17 -- and a key figure in resolving the Apollo 13 crisis 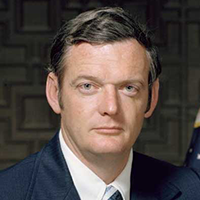 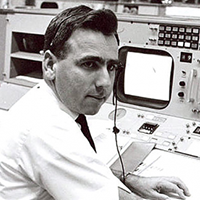 More information about the attendees:

Buzz Aldrin
As Lunar Module Pilot for Apollo 11, the first lunar landing, Buzz Aldrin is (along with Neil Armstrong) the first person to ever land on the moon. Watched by millions around the world on live television, the duo spent over two hours working on the lunar surface. Aldrin’s first space flight, on Gemini 12, was an opportunity to perform a spacewalk that solved many of the issues that had plagued previous missions, allowing NASA to move into the Apollo era with confidence. Aldrin continues to advocate for space exploration as a strong supporter of manned missions to Mars. For more information, visit http://buzzaldrin.com/ or https://en.wikipedia.org/wiki/Buzz_Aldrin.

Gene Cernan
Gene Cernan is one of a very small group of people who had the good fortune to visit the moon twice. Selected as an astronaut in 1963, his first flight was aboard Gemini 9 in 1966, when he made a daring and risky spacewalk. He first flew to the moon as the Lunar Module Pilot of Apollo 10, swooping to just a few miles above the lunar surface on a dry run of the Apollo 11 mission. When speeding back through Earth’s atmosphere, Apollo 10 broke the record for the fastest ever manned vehicle, a distinction the mission still holds. Gene’s last flight was as the Commander of Apollo 17, leaving the very last footprints on the moon (for now) and officially closing the Apollo chapter of lunar surface exploration. He is the subject of a recently acclaimed documentary, “The Last Man On The Moon.” For more information, visit http://www.genecernan.com/ or https://en.wikipedia.org/wiki/Eugene_Cernan.

Walt Cunningham
Selected by NASA in 1963, Walt Cunningham flew on 1968’s Apollo 7 mission. It was the first manned Apollo flight, following the loss of the Apollo 1 crew during their training. Cunningham’s mission restored confidence in the Apollo spacecraft, allowing for the first landing on the moon less than a year later. Cunningham then performed preliminary design work on the Skylab space station, before leaving NASA in 1971. He is the author of one of the most highly-regarded astronaut memoirs, “The All-American Boys.” For more information, visit http://waltercunningham.com/ or https://en.wikipedia.org/wiki/Walter_Cunningham.

Charlie Duke
Charlie Duke is the youngest person to have walked on the moon. The Apollo 16 mission was America’s fifth manned lunar landing, and the first to land in the desolate lunar highlands. Using a lunar rover, Duke spent almost three days exploring the region, making geological discoveries that completely revised scientific thinking about the highlands. Three years earlier, Duke was the astronaut in mission control as Neil Armstrong piloted his Apollo 11 lunar module to the first lunar landing. His voice assisted Armstrong during that history-making touchdown. For more information, visit http://www.charlieduke.net/ or https://en.wikipedia.org/wiki/Charles_Duke.

Al Worden
As Command Module Pilot for Apollo 15, the first extended scientific exploration of our moon, Al Worden spent six days orbiting our neighbor in space, including three days completely alone, the most isolated human in existence. During the return to earth he also conducted the first spacewalk in deep space, becoming the first human to see both the entire earth and moon simply by turning his head. The Apollo 15 flight capped an already-impressive career as an astronaut, including important work on the pioneering Apollo 9 and Apollo 12 missions, as well as the perilous flight of Apollo 13. His memoir, “Falling To Earth,” became a national bestseller. For more information, visit http://www.alworden.com/ or https://en.wikipedia.org/wiki/Alfred_Worden.

Gerry Griffin
Gerry Griffin served as Lead Flight Director for three lunar landing missions: Apollo 12, 15 and 17. As a Flight Director for Apollo 13 he made vital contributions to the survival of the Apollo crew. Joining NASA in 1960, he worked as a Flight Controller during NASA’s pre-Apollo era. Griffin went on to the prestigious position of directing NASA’s space center in Houston. He also worked as a technical advisor on the “Apollo 13” movie. For more information, visit https://en.wikipedia.org/wiki/Gerald_D._Griffin.

Glynn Lunney
Space missions are a careful balance of responsibilities between the astronauts in space, and those who assist them on the ground. Without both working together, America’s greatest space achievements would not have been possible. In moments such as the first moon landing and the Apollo 13 crisis, the people of Mission Control have proven over and over that they were ready for the unexpected challenges and real-time decisions. However good the technology, in the end the right person at the right moment, making the right decision, is crucial. Lunney was a vital part of most of these key moments. He was an employee of NASA from its creation in 1958, and a key figure from the Mercury missions through to the Space Shuttle era, including overseeing the first international space mission. Lunney served as Chief of Flight Directors for most of the Gemini and Apollo flights. During the Apollo 13 crisis, Lunney and his team faced the challenge of having to power up the lunar module, while transferring guidance and navigation data to it from the dying command module. His excellent memory and quick thinking were critical in the success of his team during those first, critical hours. For more information, visit https://en.wikipedia.org/wiki/Glynn_Lunney.

Milt Windler
Joining the space program in 1959 and working on America’s first human space missions as part of Project Mercury, Windler was promoted to Flight Director for the Apollo missions. He worked most of those pioneering flights, as well as all three Skylab space station missions, serving as a Flight Director on Apollo Missions 8, 10, 12, 13, 14 and 15. As the Lead Flight Director for the Apollo 13 mission, he was a group recipient of the Presidential Medal of Freedom (the highest honor given to a civilian by a President) for his contributions to bringing the crew back alive. For more information, visit https://en.wikipedia.org/wiki/Apollo_13_Mission_Operations_Team.

Throughout the evening these men will participate in panel discussions related to a wide range of topics from the Mercury, Gemini and Apollo space programs. Please note: This is a no autograph event.