Significant progress has occurred this past year on the San Diego Air & Museum’s reproduction of a Boeing FB-5, an early 1926 military fighter produced in small numbers for the US Navy and United States Marine Corps. The empennage, lower wings, wing struts and wheel carriage have been successful pre-fit. Fabrication of metal details and spoked wheels has be performed by our team of volunteers, allowing for installation of fabric onto the 32-foot-long one-piece upper wing and fuselage. Wing stitching on the massive upper wing took nearly eight weeks to complete. There are 43 ribs, each requiring wing stitching of the top and bottom.

Soon the fuselage will move into the protective coating and painting process followed by the upper wing. The lower wings and rear vertical and horizontal stabilizers have been spray painted with protective coatings.

Boeing Aircraft Company, as well as other aircraft design and manufacturing firms of the 1920s, were still learning how to improve aircraft manufacturing and design. Welded airframes and fabric covered fuselages and wings dictated the use of fly wires with strong wing struts to create robust and sturdy aircraft if speeds greater than 120 mph were to be achieved. Fly wires for our FB-5 did not exist and we were required to fabricate (or in some cases modify) 20 fly wires. 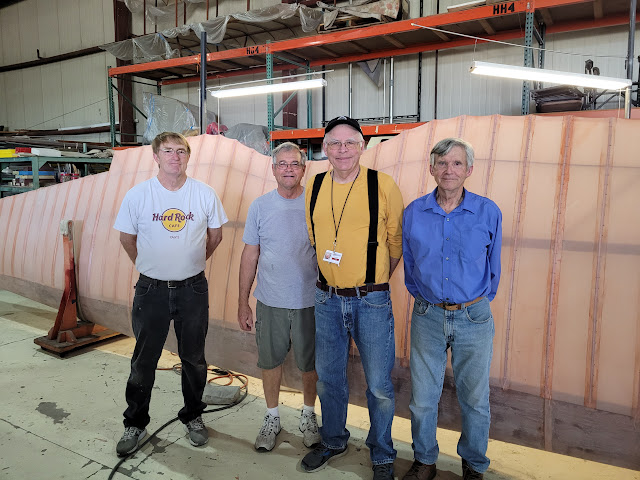 The proud Volunteers from the Museum's Gillespie Field Annex.

Once the rear vertical and rear horizontal stabilizers and fuselage come back from painting, we will begin the final assembly process of mating these items together, starting with the upper wing. Next, we will stage and prepare the two lower wings. We anticipate that the massive upper wing will be painted by mid-September which will allow for final assembly early in October of 2022.

The entire process will have taken nearly seven years and many volunteer manhours to complete. This example of a 1926 Boeing military fighter plane will exemplify one of only four known FB-5 aircraft of this type known to exist in the United States.