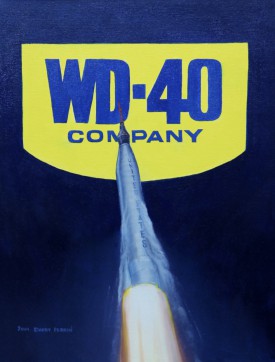 WD-40 was invented in San Diego in 1953 as a rust-prevention solvent for Atlas missile outer skins. A chemist at the Rocket Chemical Company created a compound that would prevent rust and corrosion on the Atlas. It took him 40 attempts to get the water displacing formula right, but the end result became the formula for WD-40. Once the company learned that people were using the product at home, they began putting it into aerosol cans. It first appeared on store shelves in San Diego in 1958. By the following year, the company had nearly doubled in size, selling 45 cases a day to stores in the area. In 1961, the first truckload order was filled when employees worked overtime to produce additional concentrate to meet the disaster needs of victims of Gulf Coast hurricane Carla. WD-40 was used to recondition vehicles and equipment that had been damaged by the flooding. It made history again in 1964 when NASA used WD-40 on Friendship VII, in which astronaut John Glenn circled the Earth. In 1970, the Rocket Chemical Company was renamed WD-40 Company. In 1973, the Company went public, still with only one product. The company that started with three employees had grown into a company of more than 300, with annual sales of more than $300 million. Why this popularity and fierce loyalty? Former WD-40 Company CEO Gerald Schleif explained, "Unlike very few things in this world, the product actually delivers far beyond the user's expectations. That's where the emotional attachment comes in. People start believing they can't live without their WD-40."
Inducted in 2014.
Portrait Location: Near R-44 and B-5 Brougham