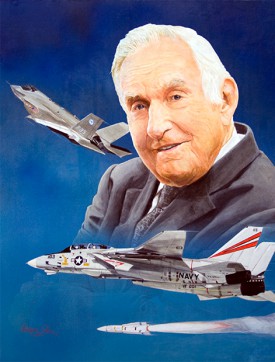 Walter Zable's interest in technology and electronics began at an early age, and he earned his bachelors degree from the College of William and Mary, where he was also a star football player. Later he received his masters in Physics and Math from the University of Florida. As a young man, Walt held many key positions in a number of industry leading companies. The quest for more innovative approaches to engineering and electronic solutions became his specialty. Those innovative solutions to complex projects would become his calling card as Walt directed development of fire control, guidance, communications, as well as command and control defense systems. He was also project supervisor in charge of electronics for the Atlas and Terrier rocket programs. In 1951 Walt founded Cubic Corporation in San Diego, one of the most innovative defense companies in the world. His company's first product was the Calorimetric Wattmeter. His personal efforts led to the development of the Department of Defense's first Air Combat Maneuvering Range, a dog-fight training system able to track fighter aircraft position, speed, altitude and attitude in real time and record the results. This enables fighter pilots to review their performance during debriefing sessions using comprehensive, objective standards rather than conjecture. Featured in the movie Top Gun, the ACMR has proven to be one of the most significant breakthroughs in fighter pilot training. Under Walt's leadership in the 1960s, Cubic grew by 588 percent, faster than any other aerospace company. Today, Cubic employs over 6,000 dedicated people. Now in his 90s, Walt is still leading his Cubic team and asking, "Why should I retire?" In 1962 he was named to Sports Illustrated's Silver Anniversary College Football All-American Team and was the College Football Hall of Fame Gold Medal recipient in 1980. This Gold Medal has been presented to an elite group, which includes seven U.S. Presidents. Walt is also a humanitarian and donates to numerous charities. His generosity to his community and his college alma mater has been significant, and he believes strongly in giving to youth inspiring institutions.
Inducted in 2007.
Portrait Location: Modern Jet