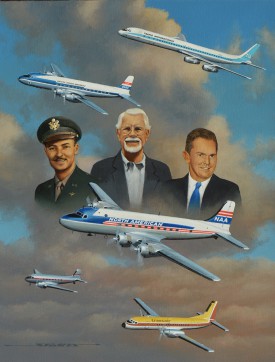 After WWII there were a number of ex-service pilots, and surplus military aircraft, as well as a huge untapped market of potential travelers who wanted fast, low cost transportation. Stan Weiss, Hal Cope, and Dr. Ralph Cox were at the forefront of those who saw this as an opportunity, and formed what became known as “non-scheduled airlines.” Cope was with North American Airlines. Weiss was one of the founders of Standard Air Cargo, which merged with Viking to form North American. Dr. Cox, a dentist, and a naval aviator during WWII, founded U.S. Overseas Airways. To ensure federal focus on aviation safety, President Roosevelt had signed the Civil Aeronautics Act in 1938, which established the independent Civil Aeronautics Authority (CAA). In 1940, the agency was split into two, also forming the Civil Aeronautics Board (CAB), which regulated airlines. By the 1938 Act, all air carriers flying scheduled routes between established terminal points had to be certified, exempting smaller, non-scheduled air carriers, as they were only providing charter or contract service with “irregularly scheduled flights.” However, following WWII, over 700 non-scheduled air carriers had begun operating as “on demand” air taxis. People flocked to the non-scheduled airlines, putting the scheduled airlines on edge. Scheduled airline carriers were quick to lobby the CAB, declaring these small carriers were unsafe. The CAB modified the 1938 rule, requiring that non-scheduled carriers obtain a letter of registration. In 1948, the CAB imposed what became known as the “three and eight rule” which limited each non-scheduled air carrier to 11 round-trip flights a month – three on high density routes and eight between any pair of cities. This highly restrictive ruling was referred to by the non-schedules as a “death edict.” Of the over 700 non-scheduled airlines formed, only 16 survive.
Inducted in 2016.
Portrait Location: Near R-44 and B-5 Brougham