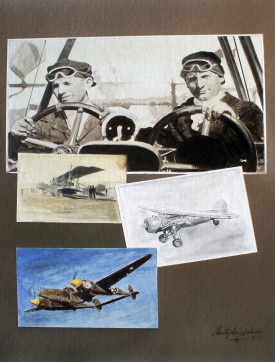 The Lockheed story begins with the Loughead brothers, Allan, Malcolm and Victor, who became fascinated with aviation after witnessing several glider demonstrations. Victor (who was actually a half brother) was educated as an engineer and published two early technical works on aviation by 1910. Victor's interest in aviation inspired Allan to learn how to fly, and Malcolm gained fame for developing a reliable hydraulic automotive brake. Malcolm and Allan set up the Alco Hydro-Aeroplane Company in San Francisco, CA and built their Model G aircraft, an original design but commercially unsuccessful. During the Panama-Pacific International Exposition in San Francisco they offered the crowds flights in their Model G, and made enough money to start the Loughead Aircraft Manufacturing Company in 1916, located in Santa Barbara, CA. Their first project, the F-1, was the world's largest sea plane, able to carry 10 passengers. Jack Northrop, a 20-yearold draftsman, worked on this project. The F-1 flew in 1918, and the brothers started building flying boats for the Navy. After World War I, the company developed the S-1, a single-seat biplane intended for civilian use, which was never successful. Financially strained, Loughead Aircraft closed in 1921. Malcolm Loughead moved to Detroit and became successful with a hydraulic-brake system he developed for cars. Tired of his name being mispronounced "Log-head," Malcolm officially changed the spelling to Lockheed to match its pronunciation, and used this name for his new company, the Lockheed Hydraulic Brake Company. Reuniting with Jack Northrop in 1926, Allan started the Lockheed Aircraft Corporation, incorporating the "Lockheed" spelling to associate with Malcolm's successful brake company. Their first aircraft was Lockheed Vega, an incredibly successful high speed monoplane. With a range of 1,000 miles, a cruising speed of 185 miles per hour, and capacity for 6 people, the Vega became a popular choice for many of the world's top aviators, including Amelia Earhart and Wiley Post. In 1929 Lockheed was sold to Detroit Aircraft Corporation and Allan Loughead resigned from the company. Even though the brothers were no longer directly involved, the company thrived. Lockheed produced such airplanes as the Electra, the P-38, L049 Constellation, and the L-1011 Tristar.
Inducted in 2009.
Portrait Location: Golden Age of Flight Gallery