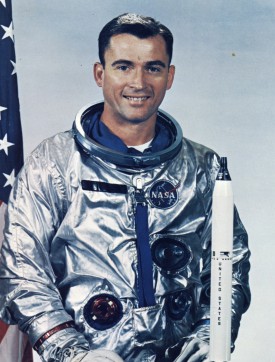 John Young received a degree in aeronautical engineering with highest honors from Georgia Institute of Technology in 1952. Upon graduation from Georgia Tech, Young entered the U.S. Navy. After serving on the destroyer USS Laws during the Korean War, he was sent to flight training and assigned to Fighter Squadron 103, flying Cougars and Crusaders. After 4 years in fighter jets, he completed the Navy's test pilot training program and was assigned to the Patuxent River Naval Air Test Center. In 1962 he set world time-to-climb records to 3,000- and 25,000-meter altitudes in the F-4 Phantom. That same year he was selected for the second group of NASA astronauts. His first space flight was in 1965 with Gus Grissom in Gemini 3, the first manned Gemini mission. A year later, Young commanded the Gemini X mission, which completed a dual rendezvous with two separate Agena vehicles. On his third space flight, he was command module pilot of Apollo 10, testing lunar module separation and rendezvous procedures while in lunar orbit. In 1972, he commanded the Apollo 16 mission to the lunar highlands at Descartes. With Charlie Duke, Young explored over 16 miles of the Moon's surface in the lunar rover. John Young combined his space flight and test pilot experience on his fifth mission as commander of STS-1, the first flight of the space shuttle. The Columbia was the first winged vehicle to return from space with a runway landing. After circling the earth 36 times, Young landed at Edwards Air Force Base, California, on April 14th 1981. Young's sixth and final space flight was as commander of STS-9 in 1983. For 10 days, he and his crew performed numerous physics and life sciences experiments, returning to earth with more scientific data than all the previous Apollo and Skylab missions. Young passed away on January 5, 2018 at the age of 87.
Inducted in 1995.
Portrait Location: Space Gallery