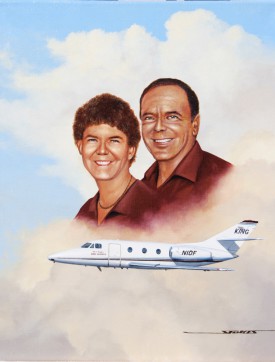 John and Martha King met as students at Indiana University. Graduating in 1966, they soon began a partnership, both in marriage and business. Realizing that their first venture, a lubrication service for truck fleets, was not heir passion, they moved on. Living by the dictum, "love what you do and success will follow," the couple decided to relax and indulge their love of aviation for a while and teach flying. The Kings launched their flying business in 1970, using a spare bedroom in their house in San Diego, CA. They taught ground school all around the country for several years, traveling the nation on weekends. After some deliberation, the Kings decided to put their courses on video and found that people could relate to this. Being used by instructors in the beginning, these videos eventually became available for individual purchase. Today their company, King Schools, Inc., operates out of a dedicated complex in San Diego, California that includes a television and software production facility. They ship about 500,000 videos and DVDs each year. For more than 30 years, King Schools has been delivering millions of videotapes, CD-ROMs and DVDs to pilots in training all around the world. They also produce safety videos for the FAA's National Aviation Safety Program. Almost half of each year's crop of private and instrument pilots in the United States use King Schools' educational materials. Pilots throughout the world regard John and Martha as their personal aviation mentors. King Schools continues to revolutionize pilot training by pioneering the development of multimedia training programs on many aviation subjects including groundbreaking programs on aviation risk management. The Kings have both earned every class of pilot certification and every flight and ground instructor rating the FAA offers. They have received many honors including Aviation Educators of the Year, Cliff Henderson Award of Achievement, Excellence in Pilot Training, and 100 Most Influential Women in Aviation.
Inducted in 2008.
Portrait Location: Hall of Fame Hallway