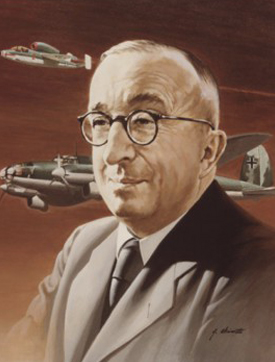 Ernst Heinkel completed four years of engineering study at the Technical Institute of Stuttgart. While still a student there in 1910, he constructed and flew an airplane of his own design. Within three years he had advanced to chief engineer of a major aircraft company and had completed many successful aircraft designs by the end of 1918. World records and first flights were routine accomplishments of this renowned aircraft and engine designer, whose active career in aeronautics spanned five decades. Dr. Heinkel founded his own aircraft company in 1922. He was especially successful in the design and production of civilian and military aircraft for Germany and some foreign countries. These aircraft were to set speed records and established Heinkel with a reputation for producing advanced and aerodynamically efficient aircraft. The late 1930s were a particularly fruitful period in which he was instrumental in the development of jet engines. It became clear that faster airplanes were needed and would require an entirely new type of engine. Heinkel built such an aircraft, the rocket-powered He- 176, testing two types of rocket motors. Entering the field of jet propulsion, Heinkel built the world's first jet airplane, the He-178, using a Hans von Ohain designed jet engine. This aircraft flew in August 1939, the same year Heinkel's He-100, a prototype fighter, set a world record of 464 miles per hour. Following the end of hostilities in 1945, Dr. Heinkel kept his business alive with the production of small land transportation vehicles before resuming the development of aircraft and jet engines a few years later.

The members of the International Air & Space Hall of Fame are recognized for their outstanding contributions to aviation and space innovations. In some cases, these contributions were achieved during wartime, under despotic regimes, and at times infringed upon human rights.
Inducted in 1981.
Portrait Location: Hall of Fame Hallway