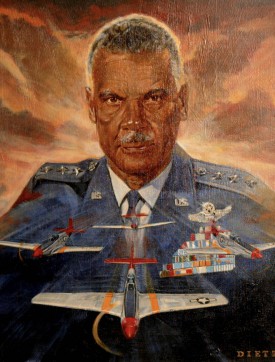 Six years after graduating from the U.S. Military Academy at West Point, Benjamin Davis, a member of the first black pilots training class, earned his Army Air Corps pilot's wings in March 1942 at Tuskegee Army Air Field, Alabama. He commanded the 99th Pursuit Squadron and the 332nd Fighter Group; two all-black flying units that saw combat in the Mediterranean theater during World War II. These units had the unique distinction of never losing a single bomber to enemy fighters during the group's 200 escort missions. In 1953 he again saw combat when he assumed command of the 51st Fighter-Interceptor Wing and flew the F-86 in Korea. With his promotion to brigadier general, Davis became the first black to earn a star in the United States Air Force. He retired as a lieutenant general in 1970. Lt Gen Davis subsequently served in the U.S. Department of Transportation as the first director of Civil Aviation Security, and as assistant secretary of transportation for Environment, Safety and Consumer Affairs. While serving in this position, he developed and implemented the security systems which currently protect American aviation facilities from terrorism. Throughout his long aviation career, Benjamin O. Davis, Jr., by his leadership and his example, inspired young Americans from diverse ethnic backgrounds to pursue their goals in aerospace-related careers.
Inducted in 1996.
Portrait Location: Hall of Fame Hallway