William H. Renison (October 29, 1906 – May 1, 1955) had a diverse background of aircraft industrial occupations, but mostly within the managerial positions. He attended the University of Michigan in 1928 and graduated with a degree in Aeronautical Engineering. Following his graduation, Renison maintained a steady and rising career in aircraft industries for almost three decades.

He started to work at Krieder-Reisner Naval Aircraft factory in Maryland. He then proceeded to work at B/J Aeronautics Corp. (the predecessor to North American). From 1936-1945, Renison worked at Consolidated Vultee Aircraft Corp. in San Diego as an Assistant Division Manager, where he handled cost estimating, production control, and executive administration. He left Consolidated Vultee in 1945, and became the Chief Production Engineer for General Tire & Rubber. Renison moved on to work at the Alameda Naval Air Station (NAS) as an industrial management engineer. Following his graduation in the Naval Dept. Work Improvement Program Supervisor Training course, Renison became a General Superintendent of Aircraft shops at McClellan Airforce Base. Renison quickly left McClellan to join Hiller Helicopters in the private sector, where he supervised the production systems for the helicopters. By the end of 1953, Renison joined Northrop Aircraft INC. at the Palmdale facility, where he coordinated the enter Palmdale project, and helped develop the first F-89 Scorpion fighter jets to the USAF. 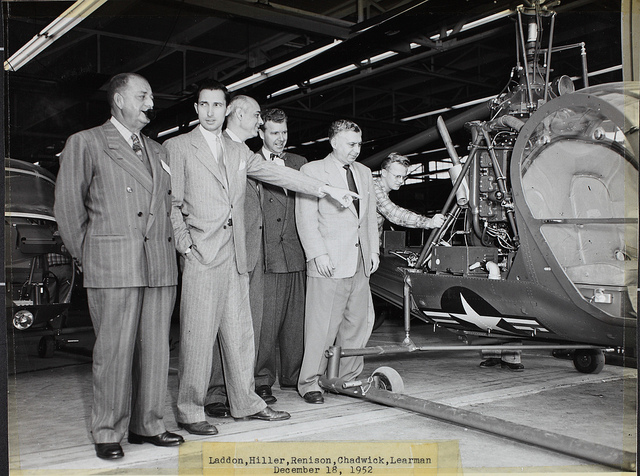 Items in this collection include newspapers, newspaper clips, a postcard, certificates, ribbons, a passport and identification card, business brochures and bulletins, corporate correspondence, and photographs ranging from 1948 to 1954.

For more on this collection, see our Descriptive Finding Guide.