Shown in the Museum’s Pavilion of Flight in eternal pursuit of a Mig-17 is the F-4 Phantom II. Manufactured by McDonnell Aircraft Company, the F-4 Phantom first entered service in December 1960. Over the next 19 years, it was manufactured in large numbers – more than 5,200 aircraft were built by the time production was completed.

During its combat life, the Phantom scored in excess of 320 aerial victories. With its all-weather combat effectiveness and its rugged design, it quickly became a pilot favorite. It is one of the few aircraft to perform every fighter mission: interceptor, air superiority, air-to-ground attack, reconnaissance and escort missions. After its distinguished service in the Vietnam War and Operation Desert Storm, the U.S. retired the Phantom in 1998. However, there are currently over 800 Phantoms still flying for other nations. It is possible some of these aircraft will still be flying in the year 2018 – 60 years after the Phantom’s first flight.

The Phantom was the first jet fighter to fly simultaneously with the U.S. Navy, Marine Corps and Air Force, and was also the first international fighter bomber to fly with the air arms of 10 other free world nations. It was the only fighter to fly concurrently with both the USAF and Navy aerobatic flight demonstration teams. The most versatile and popular jet fighter ever built, the F-4 Phantom II has truly become a legend in its own time.

The Phantom displayed is an original aircraft with a significant historic background. It was assigned to Fighter Squadron 96 “Fighting Falcons” aboard the San Diego based USS Constellation, where it was used for combat sorties during the Vietnam War. In early 1972, pilot Lt. Randy “Duke” Cunningham and radar intercept officer Willie Driscoll became the Navy’s first aces of the Vietnam War by scoring two Mig kills in this aircraft, and three more Mig kills in a similar F-4 from the Fighting Falcons squadron.

In 1988, after a long career with the U.S. Navy and the U.S. Marines, the Museum’s aircraft was taken out of service, completing its last flight to NAS North Island. Volunteers at the Naval Aviation Depot were called upon to prepare the aircraft for exhibit at the Museum. The aircraft engines and avionics systems were removed to save weight, but every effort was made to keep the cockpits as original as possible. From information obtained from the Museum’s archives, the aircraft was painted as it appeared in 1972, when it was assigned to VF-96 flying missions over the South China Sea and Vietnam. In 1990, the aircraft was towed to the Museum, hoisted over the outer wall and placed on prepared pedestals within the Museum’s courtyard. It honors all the naval aviation personnel who served in Vietnam. 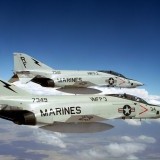 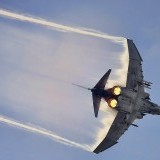 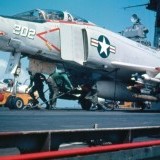