Hanging on display in the World War I gallery is a model of the Curtiss Model F flying boat. It is a two-place, single engine pusher biplane flying boat developed from Curtiss’ first successful flying boat, the Model E.  First flown in 1912, that airframe type would stay in service under many different names and designations until 1927. These flying boats were also known as “hydroaeroplanes.” Early variations of the model F’s were powered by 75 hp Curtis O engine that “pushed” them up to speeds of 55 miles per hour. Later models we powered by a 100 hp Curtis 0XX3 100 hp engine enabling them to reach nearly 70 mph and fly for 5 ½ hours. 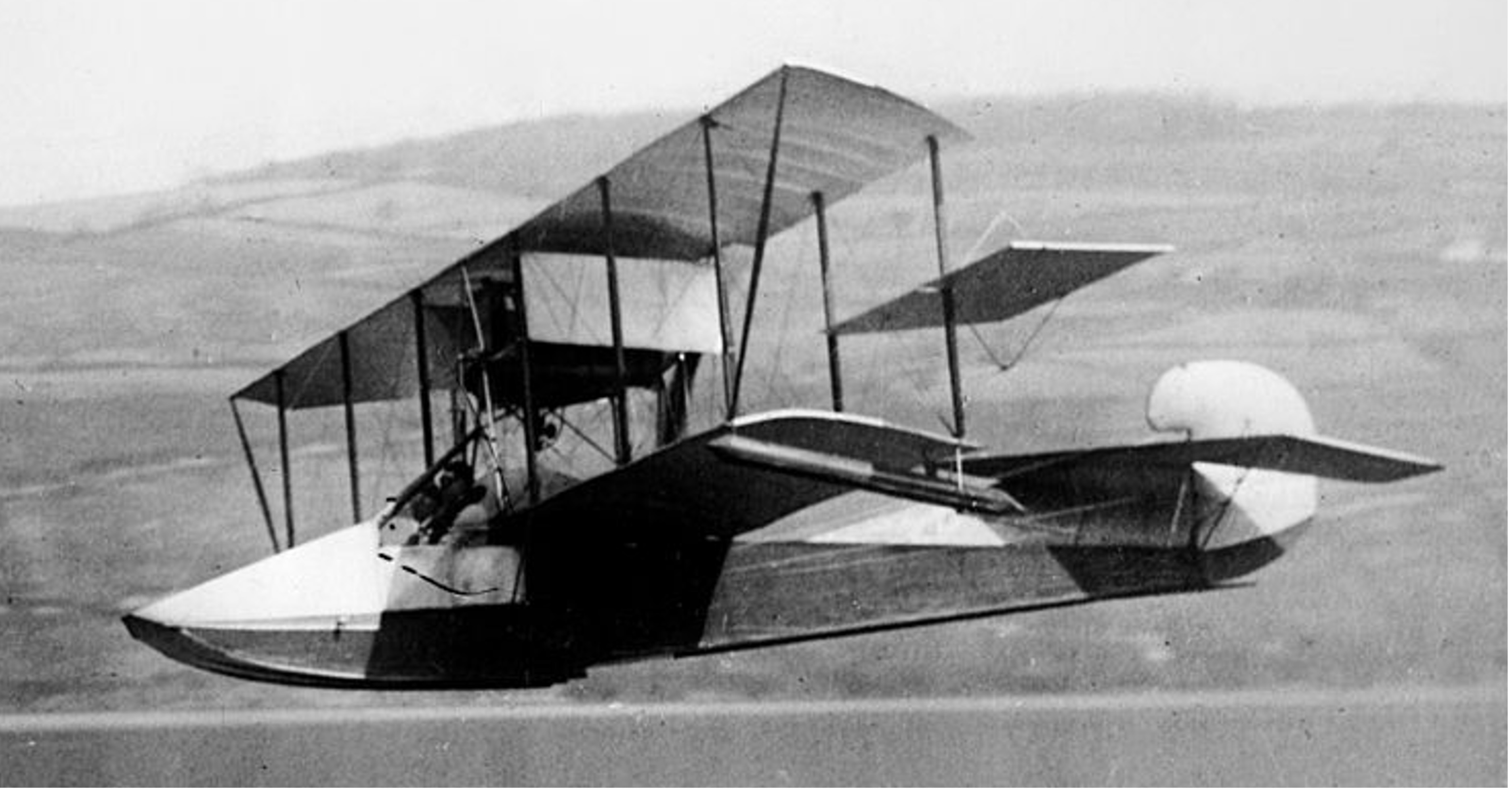 Curtiss’ earliest flying boat had a hull similar in shape to a conventional boat. Aircraft had difficulty getting off the water with this hull shape, so Curtiss solved the problem by introducing the “step” into the flying boat hull. In the photo above, note the notch in the bottom of hull about one-third ways back from the nose. At that break in the hull, the float hull slopes upwards allowing the aircraft to rotate during takeoff without the back of the fuselage digging into the water. Without being on the step, most planes will lack sufficient power to further accelerate the aircraft to takeoff speed.

Early model F aircraft had the typical Curtiss flight control system where pitch (elevator) and yaw (rudder) were controlled by a control wheel, and roll was controlled by the pilot wearing a harness (shoulder yoke) and leaning in the direction of the roll to actuate the ailerons. In 1917, the model F was modified with the so-called Deperdussin control system, similar to today’s aircraft, where elevator and ailerons are controlled by a control column or stick, and the rudder is controlled by a rudder bar or pedals. In later Model Fs, the signature interplane Curtiss ailerons mounted between the wings were relocated to the upper wing. 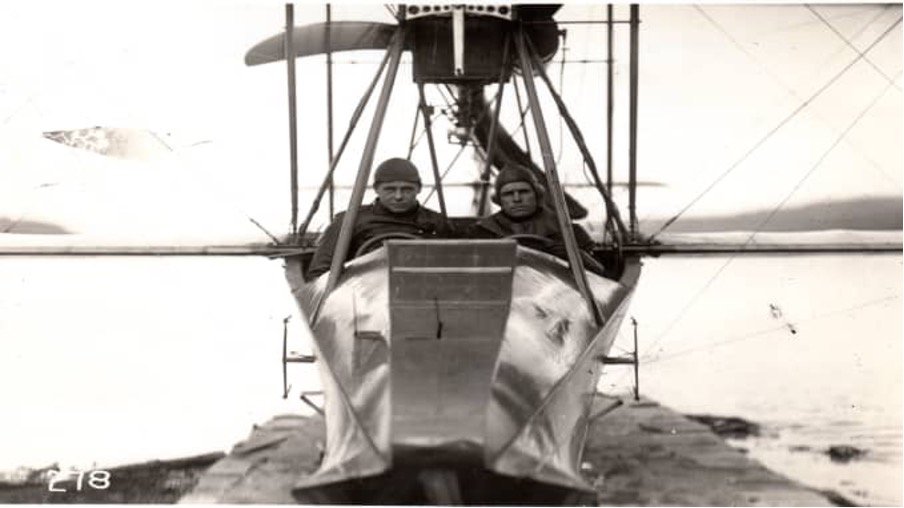 Pilot and passenger in a Model F. In this photo Lawrence Sperry (left) about to test his gyroscopic autopilot.

In August 1913, a Model F, designated as a C-2, became the first aircraft to fly under automatic control when fitted with a gyroscopic stabilizer designed by Elmer Sperry and fitted to the aircraft by his son, Lawrence.  Lawrence later demonstrated the system in France in December 1914 at the International Airplane Safety Contest. There he flew a model C-2 down the Seine River, hands off the controls and held in the air, while his mechanic stood out on the wing of the aircraft. For this dramatic aerial demonstration, he won first prize and 50,000 francs.

Lawrence Sperry flies hands off while mechanic Emil Cachin stands on the wing.

There were additional “firsts.” A Model F, designated as an AB-3, became the first US heavier-than-air aircraft to see military action when launched from the cruiser USS Birmingham in April 1914 on a scouting mission over Veracruz during the United States occupation of Veracruz, Mexico. In November 1915, flying as an AB-2, it became the first aircraft to be catapulted from a warship underway when launched from the armored cruiser USS North Carolina. When World War I began, the Model F became the Navy’s standard flying boat trainer. Some Model Fs flew with the Army.

Variants of the airplane included one that carried a stretcher patient behind the cockpit, a five- seat custom version, and even a triplane. From its inception, different models of the aircraft flew under many colorful names, among them Flying Fish, Freak Boat, Tadpole, and Seagull. Ten Seagulls were still flying with Rogers Airlines out of Miami and Nassau as late as 1927. They flew in the south in the winter, then flew north to New York in the summer to do barnstorming and undergo repairs.

The Model F’s general airframe design, with modifications, appeared in the single and multiengine variants of the Curtiss H “America” series flying boats that followed. 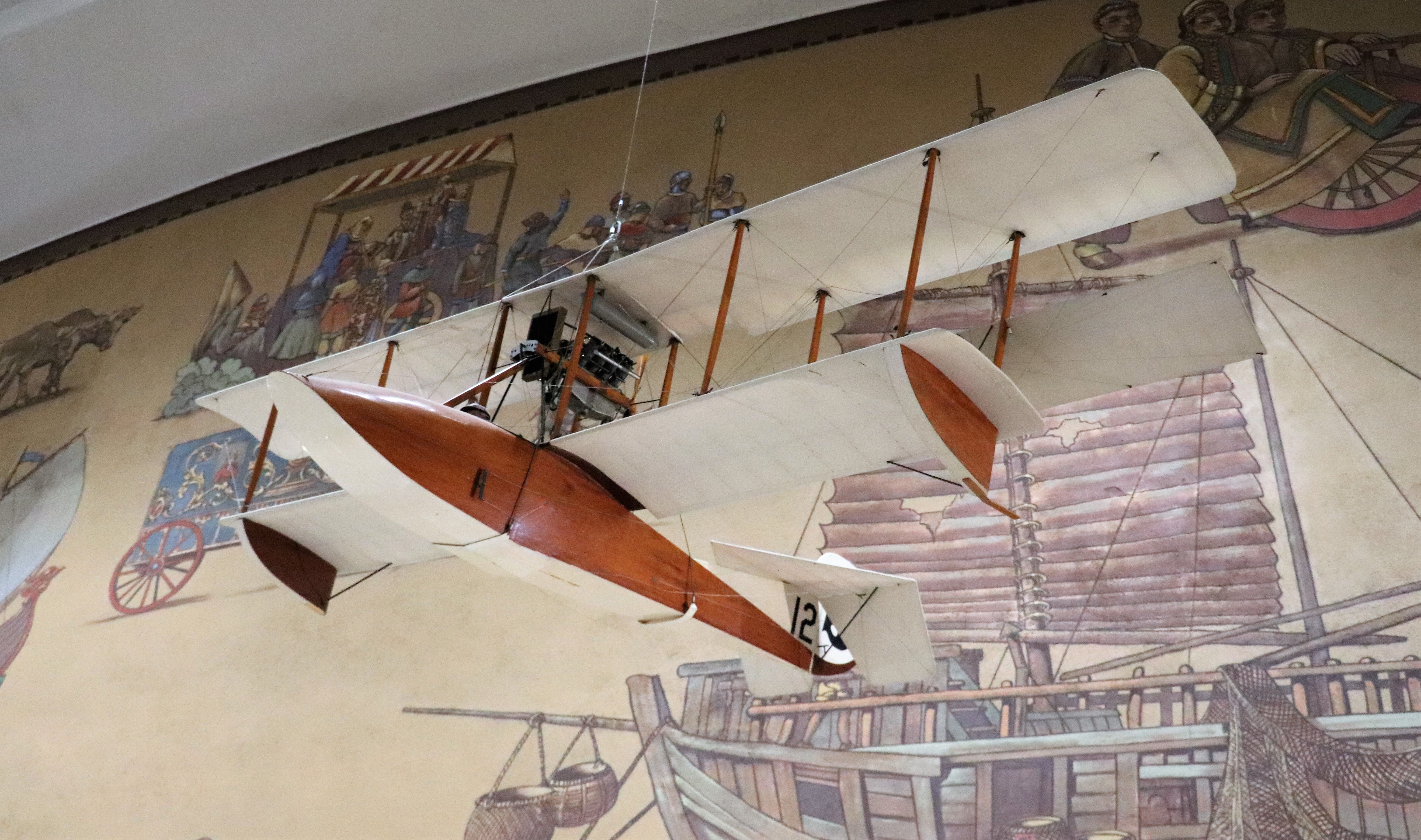 This ¼ scale F Boat model was created for the Museum in 1984 by Don McKilligan of Pleasant Hill, California. It carries very unique insignia and markings. On April 15, 1916 a large anchor and a two-digit number, both in dark blue, were adopted to designate naval airplanes. The Navy's airplanes carried these unique markings for only one year, until May 19, 1917, when the first official National Insignia was adopted. 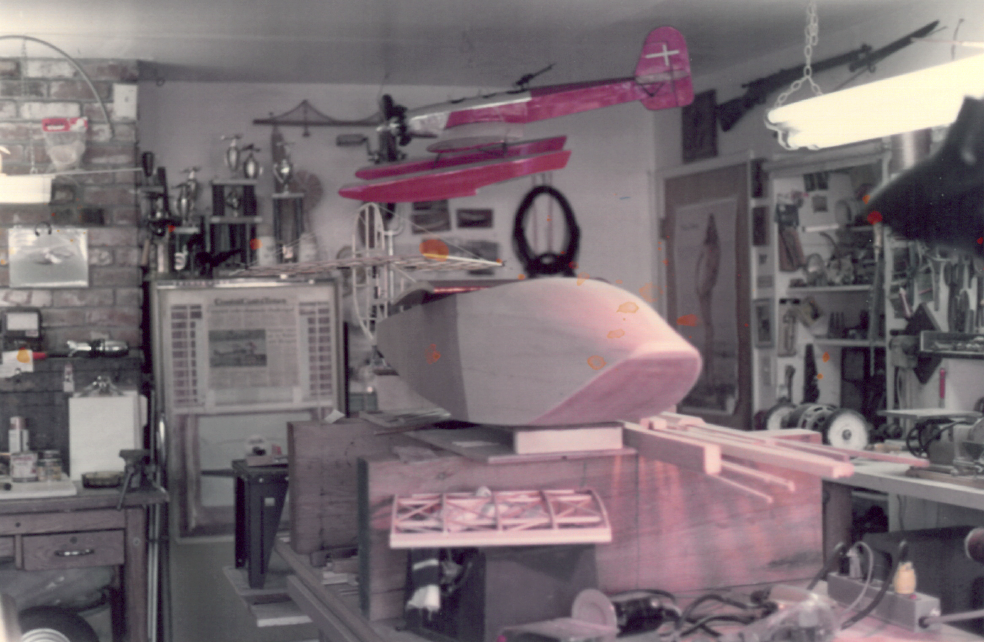 The F Boat model being built circa 1984.