The Consolidated PBY Catalina was in continuous production for more than 10 years, and as a result, was built in larger numbers than all other flying boats combined in America. One of the most versatile flying boats, the PBY, was developed in response to a U.S. Navy request in 1933 for a flying boat to succeed the Consolidated P2Y. From 1936 to 1945, approximately 4,000 Catalinas were built and used by numerous Allied air forces throughout World War II. In 1941, by adding landing gear and thus making it amphibious, the PBY-5 became the PBY-5A and the most produced variant. During the war, the aircraft served in scouting, anti-submarine, rescue and logistics roles, as well as making night attacks on Japanese supply convoys.

Black Cat operations in the Pacific were among the many famous combat roles for the PBY. Operating at night and painted overall black, the Catalinas of 14 squadrons sank 112,700 tons of merchant shipping and damaged another 47,000 tons and at least 10 Japanese warships between August 1943 and January 1944.

Postwar, the PBY continued to serve the Navy, Coast Guard and Air Force until the last was retired in 1956. Many more soldiered on with dozens of countries’ air forces and navies until well into the late sixties. It also served as a freight hauler, survey plane, passenger plane and fire fighter for many years. Today, about 100 Catalinas exist. All but two of them are amphibians, and they are largely in the hands of collectors and museums.

The Museum’s Catalina PBY-5A was built at the San Diego Consolidated plant and was delivered to the U.S. Navy on December 31, 1943. It was the 1,985th Catalina delivered by Consolidated. The plane was assigned to Johnston Island in the Pacific to patrol the Gilbert and Marshal lslands. After the war, the aircraft was used by the Coast Guard until 1956.

Thomas W. Kendall of Laguna Beach, California purchased a group of 13 Catalinas for possible conversion for civilian use. Although leased out several times to other organizations and used in the movie, “The Devil at Four O’Clock,” the Kendell family owned the plane until it was donated to the San Diego Air & Space Museum in 1986. The aircraft was flown from Van Nuys, California, to the Naval Air Rework Facility at North Island, where volunteers completed the first phase of restoration. When completed, the Catalina was then transported by barge across San Diego Bay to the Convair facilities on Harbor Drive for the second phase of restoration, accomplished by members of the Convair Alumni Association. Finally, early in the morning of August 8, 1988, the PBY was towed through San Diego streets to Balboa Park, where it was then lifted by crane over the Museum building to its present location in the Pavilion of Flight. Subsequently, in 2000, a translucent skylight was installed to protect the PBY and the other exhibits in the Pavilion. 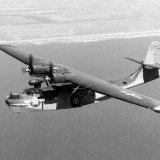 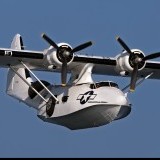 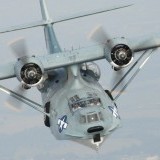