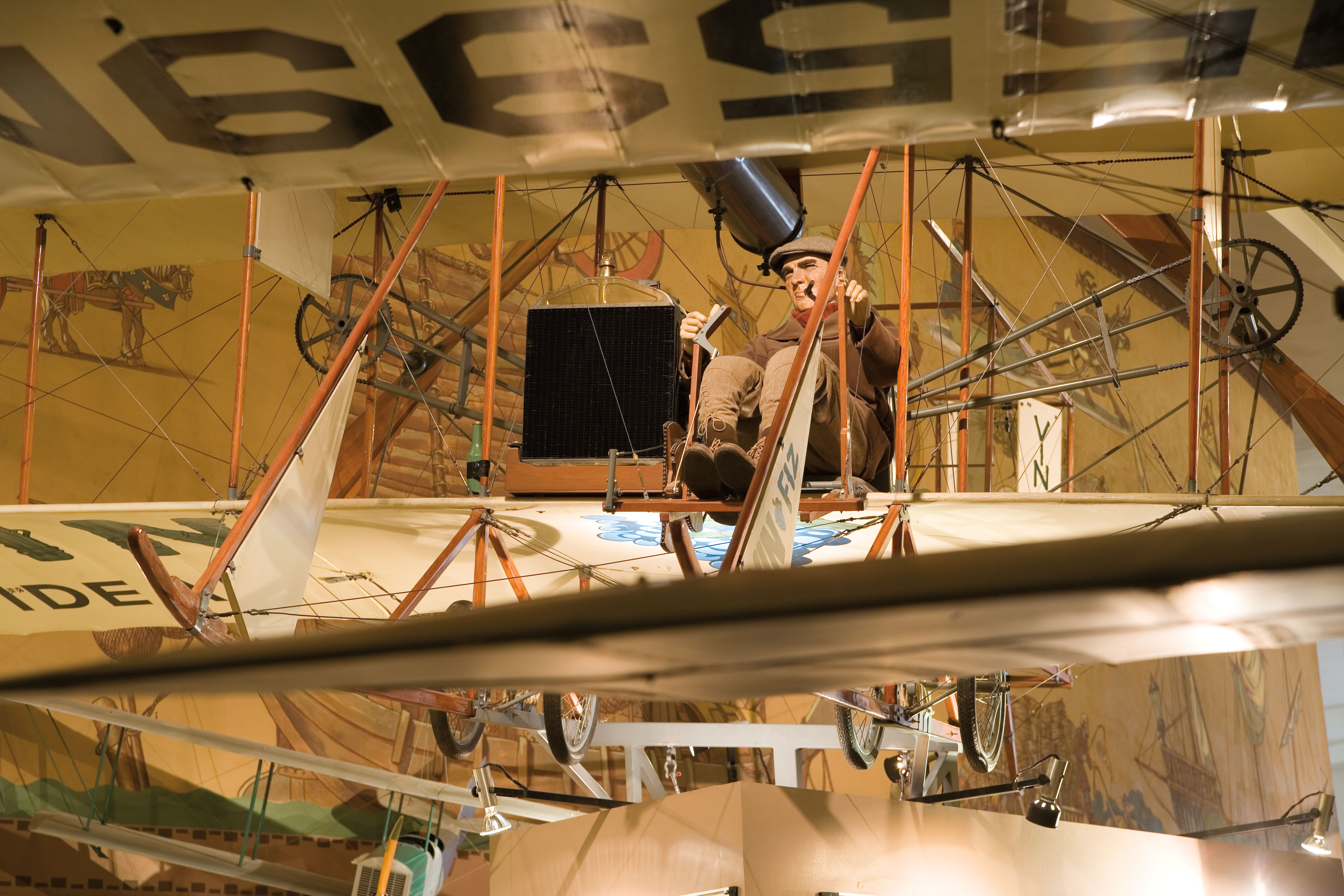 When the Museum re-opens in the near future, visitors will be treated to new historic sight in the “skies” above the Rotunda where a reproduction of the famous “Vin Fiz” now flies.

Only eight years after the Wrights’ first powered flights, the Vin Fiz would mark a milestone in aviation history – the first flight across the United States. The driving force behind the effort was a $50,000 prize offered by newspaper baron William Randolph Hearst for completing the first trans-continental flight within thirty days.

It was an enormous undertaking as there were few roads and even fewer air fields. Navigation would have to be by the “Iron Compass,” otherwise known as following railroad tracks. In the face of these difficulties, one man with a true spirit of adventure, Calbraith Perry Rodgers (who was rarely seen without a cigar in his mouth) took on the challenge. Rodgers had learned to fly at the Wright School of Aviation in Dayton, Ohio.

The Armour Company agreed to sponsor the flight to help advertise their grape soda called “Vin Fiz.” Rodgers flew a Wright EX, a special design used for exhibition flying, which was a slightly smaller version of the Wright Company’s standard Model B flyer. The Vin Fiz was powered by 35-horsepower inline four cylinder engine, and carried enough fuel for a maximum of 3 ½ hours flying time. A special railroad car was outfitted to support the trip. It contained two complete spare airplanes and a workshop for repair work. The Wrights’ longtime mechanic Charles Taylor was the chief mechanic of the expedition. One of the Wright Brothers was quoted as saying “…God knows you’ll need him.”

When all was in order, Rodgers took to the air from Sheepheads Bay, New York on September 17, 1911. Although the plan called for many stops along the way, in the end there were seventy-five; at least a dozen of these were crashes, and Rodgers was injured several times. Taylor and the team of mechanics rebuilt the Vin Fiz when necessary, and only a few pieces of the original trip made the entire trip. Finally, after flying approximately 4,300 miles and taking considerably longer than thirty days, Rodgers landed his plane on the beach at Long Beach, California and dipped his wheels in the Pacific Ocean on December 10, 1911. While Rodgers did not claim the cash prize, he did become a national hero. What remains of the original Vin Fiz is held by the Smithsonian.

The Museum’s reproduction Vin Fiz is the product of legendary aviation author Peter Bowers. It was built in 1961 to commemorate the 50th anniversary of the first trans-continental flight. The airplane is built to air-worthy standards and has been flown as a towed glider.