Jim Weir: Truly One of a Kind

Everyone at the San Diego Air & Space Museum was saddened by the passing of long-time -- and beloved -- volunteer Jim Weir on June 23, just shy of his 100th birthday.

Some cultural institution volunteers do hard work purely out of love — love of the work, love of the patrons, love of the institution itself — and there was no better example of that sort of volunteer than James Weir of the San Diego Air & Space Museum.

Jim joined our San Diego Aerospace Museum (as it was then known) in January of 1984. It really was a different time: at the beginning of 1984, Reagan had won re-election as President, U.S. inflation had only just fallen to manageable levels, the world economy was rebounding from the stagnation of the 1970s and early 1980s, and the Cold War was still in full swing. In 1984, the San Diego Aerospace Museum was in its fourth year at the refurbished Ford building in Balboa Park, having rebuilt and recovered from a devastating fire in 1978. The Museum needed good, long-term volunteers; we had no idea how great a deal we were getting. 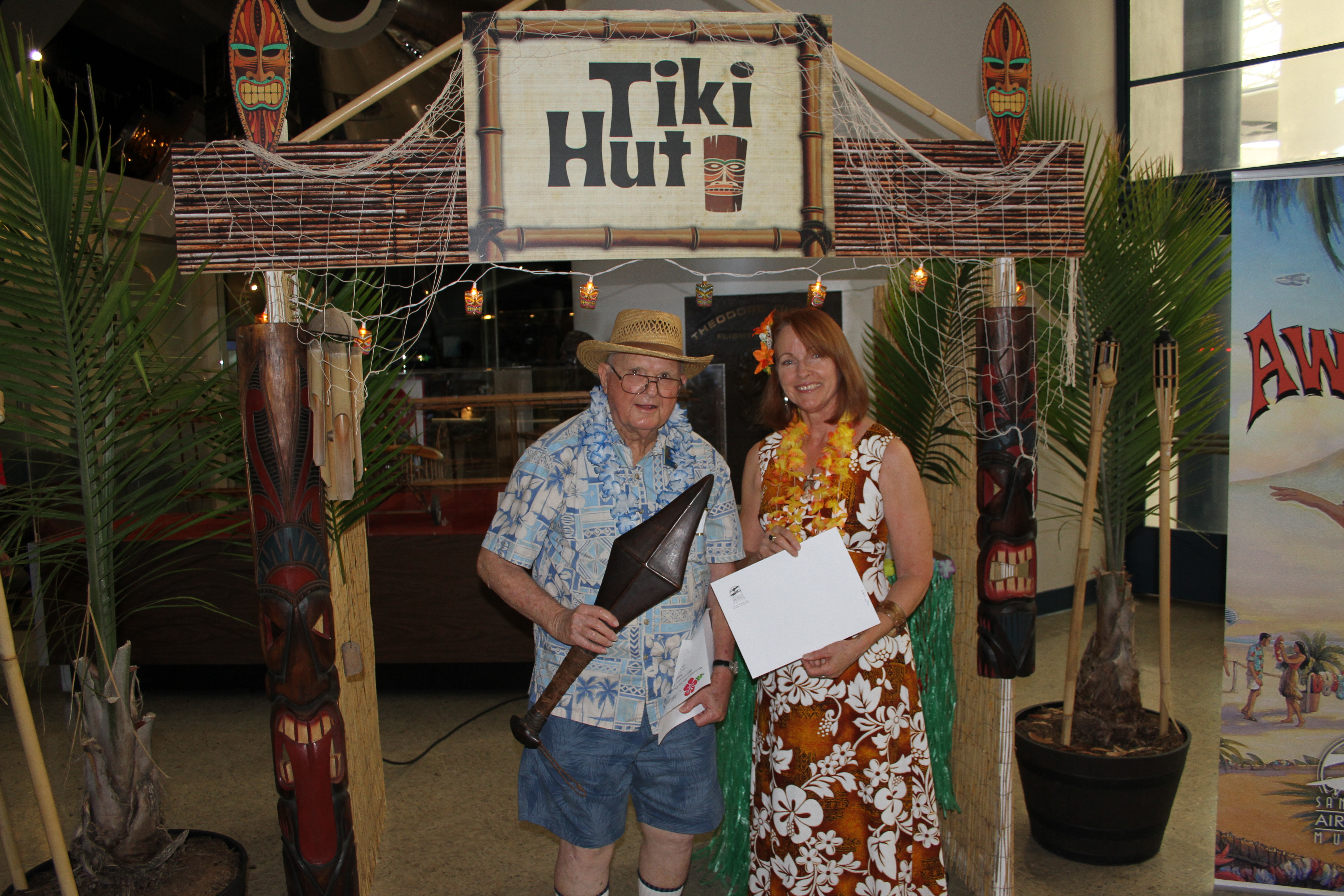 Jim Weir (left) with Archivist Debbi Seracini at one of the Museum's Volunteer Appreciation nights.

Jim immediately began work in the Restoration Shop located in the basement of the building. A Navy veteran and worker with the U.S. Navy and with Ryan and Consolidated aircraft companies, Jim had more than forty years of experience in aircraft instrumentation, especially with Navy aircraft from the Grumman Hellcat of 1944 to the Grumman Tomcat of 1984.

Of course, Jim immediately became the museum’s recognized expert for aircraft instruments. Museum aircraft, whether original or reproduction, require authentic flight instruments. Jim has always been proud of his work in this regard — and all of our museum aircraft are beautifully detailed, with particular attention to instrumentation.

Jim knew that a “traditional” museum can seem cold and boring, and he’d have none of it. When he occasionally found little to do in the basement Restoration Shop, he’d join the visitors on the Museum main gallery floor, offering them technical information and anecdotes about the various aircraft they happen to be near. Jim’s genial manner and obvious subject matter expertise were always welcome and disarming, and he would make the visitor experience at the Air & Space Museum more human and genuine.


Cheerful and active at nearly 100 years of age, Jim was something of a brand symbol for us. With over 11,600 hours of documented volunteer hours since 1994 (our conservative estimate of actual hours would be more than 15,000 hours), Jim gave a lot of himself to the San Diego Air & Space Museum and to the community as a whole. He did it out of love — and we loved him right back.

“We’ve said it for a long, long time. Our volunteers are the heart and soul of the San Diego Air & Space Museum,” said Jim Kidrick, President & CEO of the Museum. “And Jim Weir was the heart and soul of our volunteers. He always had a smile on his face and always had a great story to tell. I know everyone here at the Museum always looked forward to a visit with him. Jim Weir is truly one of a kind. He will be dearly missed.”