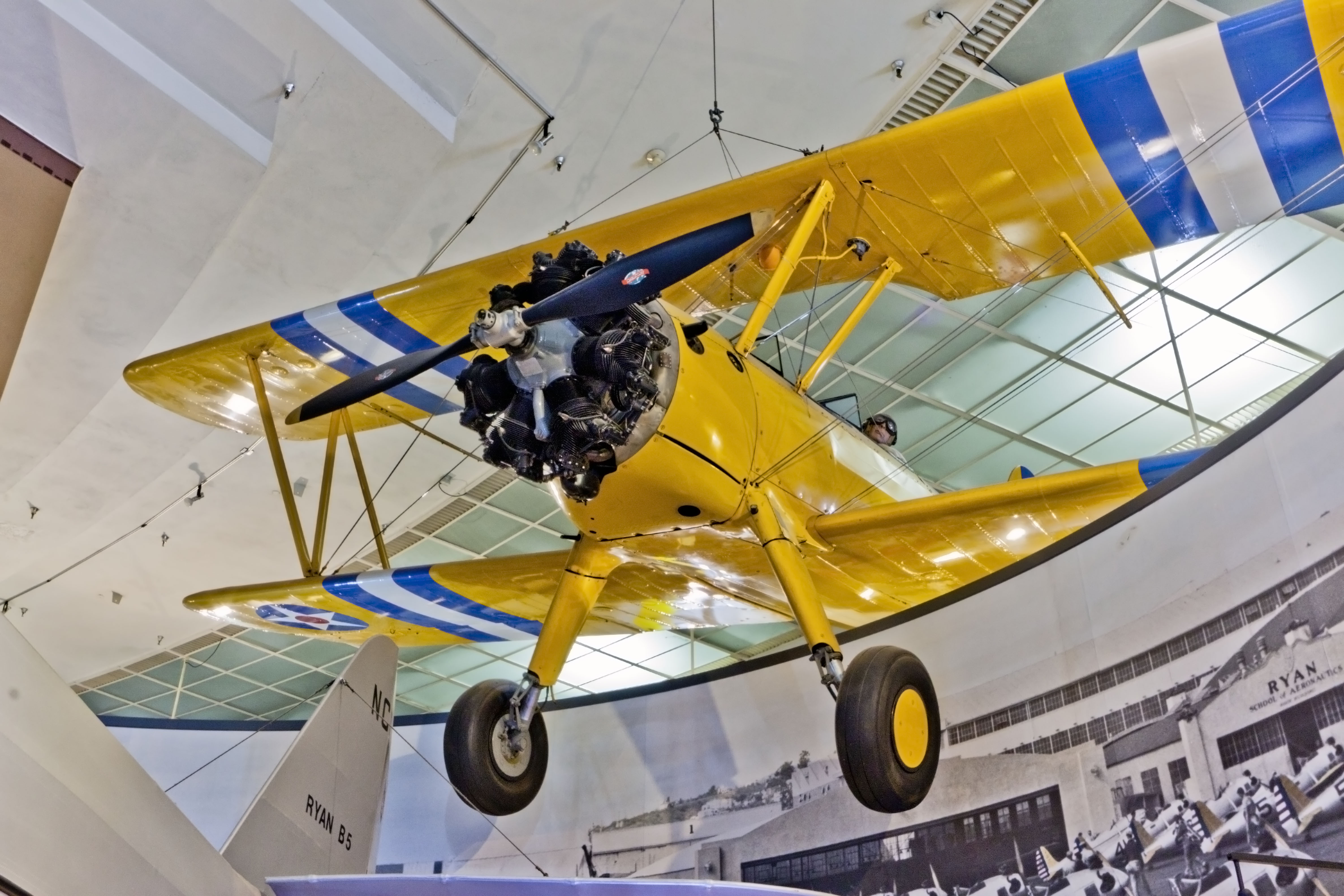 (Museum Curator Terry Brennan, has had the opportunity to fly many aircraft over his long career, a few types of which happen to be in the San Diego Air & Space Museum’s collection. In the following article he relates his experience with the N2S Stearman “Yellow Peril,” just like the one that hangs in the World War II gallery at the Museum’s Balboa Park location.).

Antique airplanes just like other collectibles command a certain respect for what they are, from where they have come, for who they may have belonged to or for the history they might tell, if that were even possible. But unlike the artifacts that you may have stored in the living room curio, airplanes are real life antiques with real live flying histories, each and every one of them with its own soaring successes and its own bad landings.

Nonetheless, we approach them on the ramps or in the hangars of the nations airports or in the quiet caverns of any number of museums stretching from east to west and back again, with a reverence that no modern factory built flyer will ever realize. In the case of those that have seen military service, whether in actual combat or in the role of liaison or trainer, or any other support operation, the history is most often written on the fuselage in a sort of military code.

Known as squadron markings, to the educated eye the seemingly unexplainable array of color and design in artwork, number and script that adorns each military aircraft from stem to stern and out to the wingtips tells a story as surely as does the written page. Battles won or battles lost, countless deployments to foreign countries or various battle groups at sea, all aircraft in the scheme of things wore squadron markings.

And perhaps none were ever as colorful as those of the Navy’s training command in and around the World War II era. Who among us has not heard the term “yellow peril” as it relates to naval operations. The reference is to the thousands of Boeing/Stearman N2S biplane trainers that introduced many more thousands of young men to the world of aviation, Navy style. Today we call the ubiquitous hue school bus yellow. The Navy, in an unashamed fashion had all those brawny trainers painted up yellow to make them more visible in the bustling flight patterns of the Navy’s many training stations across the country. To the overall yellow-scheme they added, red stripes, or green stripes or blue stripes around the fuselage and more stripes across the tops and bottoms of the wings. Large unit numbers were splashed on the sides to make them easy to spot on the ramps and finally the requisite circled stars of generous dimension adorned the wings, squadron markings meant to make sure the aircraft’s origin was never in doubt. They were, and those that remain that way today are, beautiful.

When my friend Hugh Bikle, asked me on one fine summer day not too long ago, to join him for a hop in his very own N2S, I naturally jumped at the chance. Hugh’s beautifully restored Stearman is only one of several aircraft he owns and hangars at the Hollister, California airport in his own museum. None, you can be assured, are modern out of the factory aluminum airplanes.

The N2S, also known generally as the PT-17 as used by the Army Air Force at the time, is a big airplane. It stands over nine feet tall at the top of the upper wing, and when loaded with people (originally student and instructor) and fuel, tips the scales at more than 2700 pounds. Getting into the cavernous cockpits is not difficult if you can handle a little climbing and once there all the controls necessary for flight fall to hand. It had been some time since I had flown in an open cockpit but the sound of the 220 horsepower radial firing up in front of me, the cloud of oil smoke and the slap of the wind in face brought back wonderful memories.

Bikle explained to me that I could bring the tail up anytime that I wanted to once the airplane was rolling down the runway, and the Stearman would launch itself when it felt like it. With two huge wings and more than 275 square feet of lifting surface, it didn’t take long. You don’t need to point the nose of the N2S into the air to go up either. It just sort of rises like an elevator, with no great change in pitch required on the part of the pilot. Once at altitude, and it takes awhile getting there, the airplane cruises at a very modest 105 or so mph--faster than the cars on a California freeway, but not much. The roll rate is adequate for general training but if aerobatics is your thing, expect to take a little longer than you might like to complete a roll-and make certain that you have enough altitude before starting one if you intend to maintain positive G all the way around. And every aerobatic move is preceded by a dive to gain enough airspeed to finish the maneuver.

But what fun. Cavorting around the neighborhood in a marvelous piece of history on a gorgeous day with the spray of engine oil building on your goggles-surely everything is right with the world. Fortunately, those of us who get to fly the big Stearman today don’t face the imminent threat of combat as those brave youngsters did a couple of generations ago. This Stearman experience for them was only the start of what military flying was all about. Their youthful exuberance, the fearless devil may care attitude and the spirit of those countless aviation cadets, still lives within the fabric covered fuselage of every N2S. Later, in a different place in a different airplane their mettle would be tested, but for now, we who share their piece of history, will gently touch a wingtip before climbing aboard, and always recall with reverence, those who came before us.