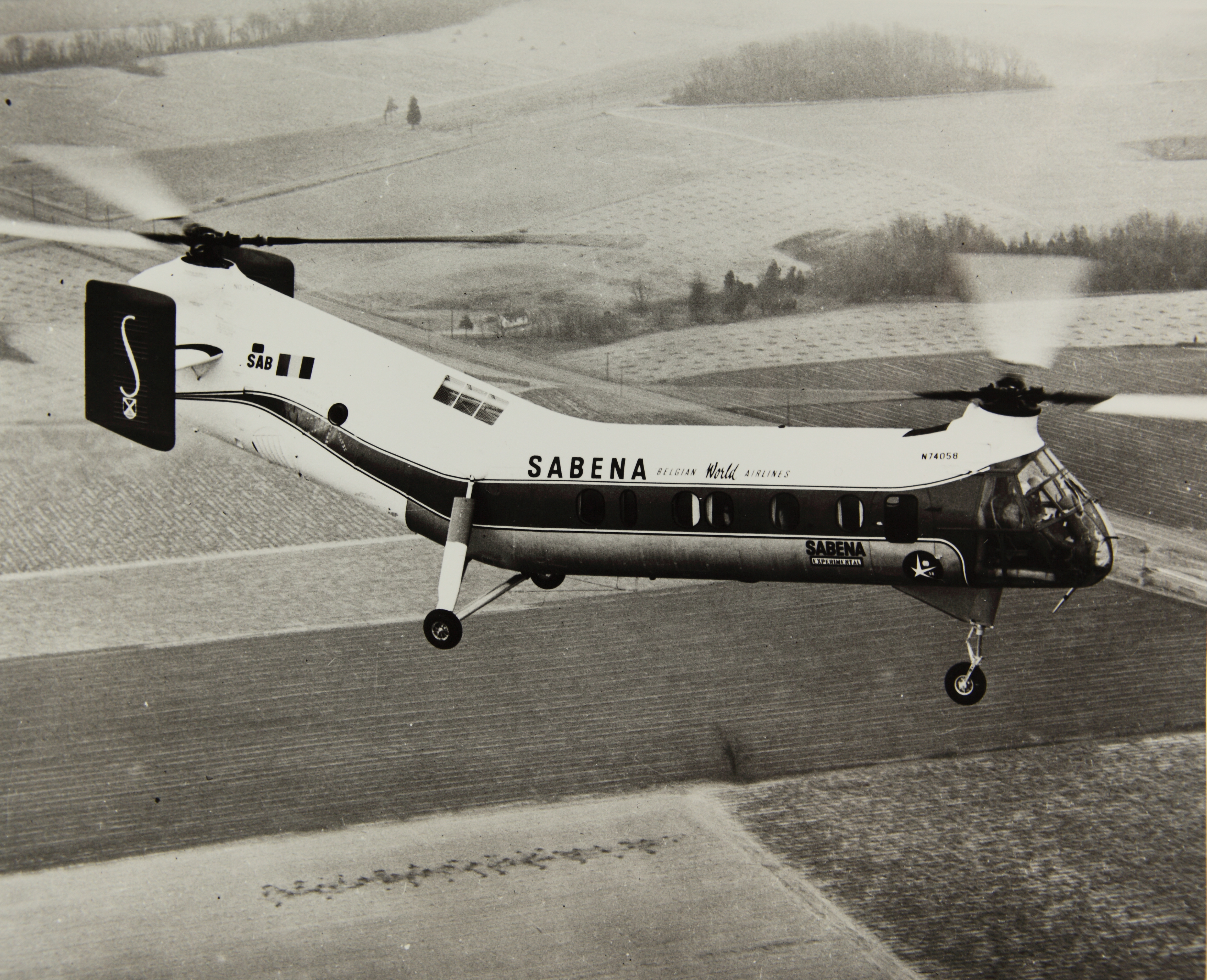 Photo caption: This Vertol 44 was a familiar sight to the thousands of tourists visiting the World’s Fair in Brussels during the summer of 1958. Two of these aircraft were leased to Sabena Belgian World Airlines for their regularly scheduled passenger operations, during the Fair. – Boeing Airplane Company Photo, June, 1960.

In conjunction with the 1958 World’s Fair, the Boeing/Vertol Company took the opportunity to premiere a civilian version of its military H-21, twin rotor, passenger-carrying helicopter. Following its appearance in Brussels, the aircraft toured Europe, demonstrating its capabilities to virtually all those countries on the continent that were part of the free world. That helicopter now sits in the Museum’s restoration hangar at our Gillespie Field Annex in El Cajon.

While on its way to Rome, an earthquake rattled the Italian countryside surrounding the capitol, leaving a group of victims helplessly stranded on a mountainside. When officials were made aware of the chopper’s position and learned of its versatilities, they requested the crew’s assistance in the vital rescue mission. One-by-one, all personnel were hoisted aboard and, at the insistence of Pope Pius, delivered to Saint Peter’s Square, which was emptied of residents and tourists, providing a more than adequate landing area.

As a symbol of his gratitude and that of the Church, the Pope walked onto the square, holy water and aspergil in hand, and graciously blessed the aircraft and her crew. Following their stay in Rome, the helicopter and crew continued their tour but, as word of the heroic rescue operation in Rome spread near and far, the call sign issued by the U.S. government to the now famous bird was dropped, and air traffic controllers throughout Europe, when required to handle arrivals or departures, simply referred to the H-21 as “Holy 1.”

The San Diego Air & Space Museum plans to return the helicopter to its original condition, as experienced by the multitude of World’s Fair visitors and dignitaries throughout Europe. It carried a civilian paint scheme then, that the Museum has researched and verified, and will be duplicated during restoration. When finished, the machine will become a jewel in the crown of historic aircraft the Museum has on display at its Gillespie Field Annex.