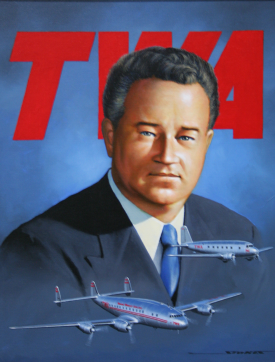 William "Jack" Frye's first introduction to aviation was when, at the age of 14, three Army Jennies made an emergency landing near the pond where was skating. Forgetting about the skating, he spent the day running errands for these flyers. This experience led to his intense interest in aviation which continued until his death. Frye moved to California in 1923, working as a dishwater and soda jerk in order to pay for flying lessons at a local airfield. Before the end of the year, he had saved and borrowed enough money to buy a half interest in the Burdett Flying School. In 1926 Frye and two associates bought out the original owner of this company and renamed it the Aero Corporation of California, prospering as regional distributor for Eaglerock and Fokker airplanes. On November 28th 1927, Aero established a subsidiary company named Standard Air Lines and began a scheduled passenger and express service between Los Angeles and Tucson with a six passenger Fokker F-VII. In May 1930, Frye sold the airline to Western Air Express where he continued on as vice president of operations. Before the end of this same year, Western merged with Transcontinental Air Transport, forming the new Transcontinental and Western Air (TWA). Frye remained in charge of operations for this new company, inaugurating the first all-air transcontinental service on October 25th 1930. The trip took 36 hours and required an overnight stop in Kansas City. As president of TWA, this airline became the nation's third largest air carrier by 1945. Frye's tenure with TWA ended in February 1947 but his aviation career did not stop there. In 1955 Frye formed his own company, the Frye Corporation, to develop a rugged airplane for use in underdeveloped countries. He moved to Tucson, Arizona and was planning a site for his factory when he was struck and killed by a drunk driver on February 3rd 1959.
Inducted in 2006.
Portrait Location: Hall of Fame Hallway