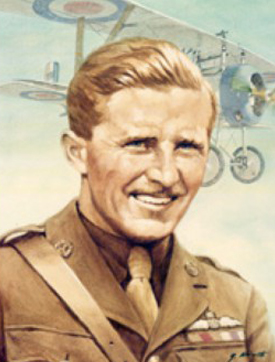 When World War I began "Billy" Bishop was a cadet at the Royal Military Academy, from which he graduated and was posted to a cavalry regiment. Ordered to France in the spring of 1915, he soon applied for flying duty. He received his pilot rating in the Royal Flying corps in March 1917. Assigned to the No. 60 Squadron, he achieved the first of his 72 confirmed victories on March 25th, beginning one of the most extraordinary performances in fighter pilot history. In the short span of five months, he scored 47 confirmed victories. For his courage and performance, he received the three highest awards for valor awarded by Great Britain; the Military Cross, Distinguished Service Order and Bar, and the Victoria Cross. His performance is credited to aggressiveness, sound tactics, and daily practice to improve skills - sterling qualities that have been the role model for fighter pilots of succeeding generations. In August 1917, Bishop was assigned to staff duty in England. Bored with staff duties and longing to return to active operations, Bishop arranged for his assignment as commanding officer of No. 85 Squadron in May 1918. In the short span of 12 days he won an additional 25 victories, a feat unequaled in history. Lt Col Bishop's final score of 72 confirmed and 25 unconfirmed victories remains a legend. Peace did not end Bishop's flying activity, much less his boundless energy. Bush flyer, executive of an oil company, directorship and president of aircraft companies and author of his well known book "Winged Warfare" are a few of his accomplishments. Recalled to active duty in 1939 and appointed Canada's first air marshal, he commanded all Royal Canadian Air Force recruiting and training activities.
Inducted in 1967.
Portrait Location: World War I Gallery