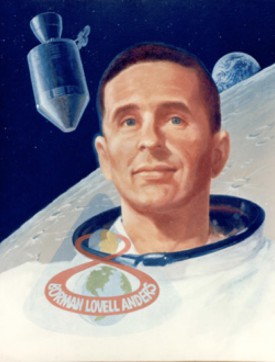 William A. Anders was born October 17th 1933, in Hong Kong but grew up in San Diego, California. He graduated from the U.S. Naval Academy in 1955, and after pilot training, he went on to graduate from Harvard University. In 1963, Anders was selected by the National Aeronautics and Space Administration (NASA) for training in the Apollo program. On December 21st 1968, Anders, James Lovell and Frank Borman became the first men to leave earth's gravity and orbit the moon. Apollo 8 gave us our first close-up view of the lunar surface and of the moon's back side. The astronauts remained in an orbit about 70 miles above the surface of the moon for about 20 hours, transmitting television pictures to earth and verifying that lunar landmarks could be used for navigation to lunar landing sites. Most significantly, Apollo 8 confirmed the technology which permitted succeeding crews to land on the moon. In 1969, Anders served as back-up lunar module pilot for Apollo 11, the first lunar landing. After leaving NASA, he went on to serve in a number of prestigious public and corporate appointments including U.S. Ambassador to Norway and chairman, General Dynamics Corporation.
Inducted in 1990.
Portrait Location: Space Gallery