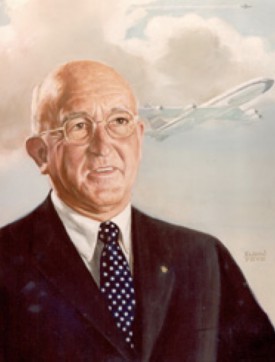 William McPherson Allen graduated from Harvard Law School in 1925 and joined the Boeing Company as legal counsel shortly thereafter. After 20 years of service as legal counsel and corporation director with the Boeing Company, he was offered and accepted the presidency in 1945, at a most crucial time in the company's history. Faced with the abrupt termination of military aircraft production at the close of World War II, his first major decision as president of Boeing was to commit the Stratocruiser transport into immediate production, putting Boeing in the post war commercial airliner market. Under his leadership, the Boeing Company pioneered development of a long line of military equipment, playing a major role in making the United States one of the strongest military nations. His genius produced the famed B-47 and B-52 strategic bombers; the KC-135 tankers for the United States Air Force; the world's first solid fuel intercontinental missile, the Minuteman; and many helicopters and seagoing ships of advanced design. Although Allen is credited with making critical decisions for Boeing during his years at the controls, none were destined to become more significant than his resolution to base the company's future on a new commercial jet transport, the world renowned 707. Nearly 1,000 of these were to fly the world's airways. Soon followed the 727, the 737, and the giant 747. A total of nearly 3,000 aircraft comprised over 50 percent of the world's jet transport fleet. These aircraft have carried the supremacy of the United States aerospace industry into every comer of the globe, while revolutionizing the international transportation systems. Much honored, he retired from his distinguished 47-year aerospace career in 1972. Allen was an innovator who encouraged diversification, helping to create The Boeing Company's place in the United States space program. He became chairman in 1968 and chairman emeritus in 1973. In 1978, the board named Allen honorary chairman.
Inducted in 1975.
Portrait Location: Hall of Fame Hallway