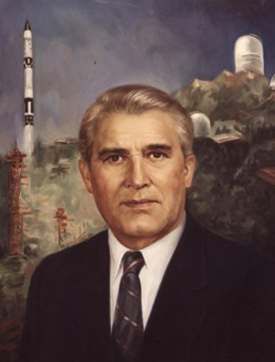 In the spring of 1930 Wernher von Braun enrolled at the Berlin Institute of Technology. While attending school, he assisted Professor Hermann Oberth in his early liquid-fueled rocket engine tests. In 1934 von Braun received his doctorate in physics at the University of Berlin. His university research led to full time employment as a rocket development engineer with the German Ordnance Department. Two successful launches of liquid fueled rockets were performed in 1934. In 1937 his inertial-guided A-3 climbed to an altitude of 15 miles with 100 pounds of payload. This program led to the establishment of the Rocket Center at Peenemunde in April 1937, where the V-2 long-range ballistic missile weapon system was developed in 1940-43. After immigrating to the United States in 1945, he directed research flights of V-2s at White Sands Missile Range and was promoted to director of Guided Missile Development. In February 1956, Dr. von Braun was appointed director of Development Operations at the Army Ballistic Missile Center in Huntsville, Alabama. Under his guidance, the Jupiter C rocket successfully launched the Western World's first satellite, Explorer. In 1960, Dr. von Braun, along with the Marshall Flight Test Center team, was transferred to NASA. Here he led the development of the Redstone rocket which placed Alan Shepard in suborbital flight in January 1961. It was his personal leadership and genius at NASA that produced the great Saturn rockets which successfully launched U.S. manned flights to the Moon. In March 1970, Dr. von Braun became deputy associate administrator at NASA Headquarters. He was a visionary whose advanced concepts will permit man to live and work in deep space.
Inducted in 1965.
Portrait Location: Space Gallery