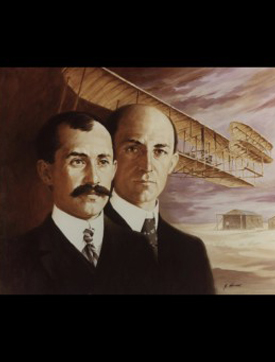 From an early age both Wilbur and Orville Wright demonstrated keen inventive mechanical abilities far beyond boyhood interests, culminating in the formation of the Wright Bicycle Company in 1892, a successful bicycle manufacturing and repair business. Although their formal education ended with graduation from high school, in the course of a few short years they became self taught engineers, renowned for their original thinking in matters of science. In 1894 their interest in flying was inspired by the gliding flights of the German pioneer Lilienthal, and they studied all that was known on the subject at that time. It was Orville who noted that soaring birds maintained lateral control of flight by flexing the tips of their wings. Following this concept in their own machines, the Wright brothers solved a vital control element ignored by earlier experimentators. Beginning with a biplane kite in 1899, they embarked on what was to become a laborious and often discouraging journey to success. Having vowed to follow a careful scientific approach to flight, they first built a practical wind tunnel where they tested over 200 wing shapes and sizes, and decided to construct and test fly a series of gliders before attempting powered flight. Selecting the sand dunes of Kill Devil Hill near Kitty Hawk, North Carolina because of its constant winds and soft sand to cushion hard landings, Wilbur and Orville test flew a series of gliders in 1900, 1901 and 1902. Through these experiences they taught themselves how to fly, controlling flight attitudes and developing the parameters for their powered machines. Ultimate success did not come readily, as their years of experimentation required them to develop literally a new science. Having solved the problems of basic structure, wing shape, and control of flight attitude, early in 1903 they began development of their own lightweight engine and suitable propellers both major achievements as these items did not exist. Approximately 10:35 in the morning, on December 17th 1903, a cold and cloudy day at Kill Devil Hill, the Wright brothers became the first men in history to make sustained controlled powered flight. The first of four flights on that historic day was made by Orville, for a distance of 120 feet. These men alone deserve the credit and the honor of giving the world the basic aero technology which influenced the course of history. They gave mankind a great and vital commercial air transportation system, the aerospace industry, and air power for defense. Their dedication in adversity serves as an inspiration to all mankind.
Inducted in 1965.
Portrait Location: Hall of Fame Hallway