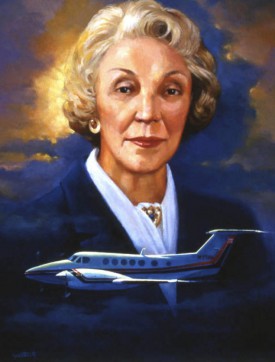 Olive Ann Beech began her long and successful career in 1925 when she joined the Travel Air Manufacturing Company as office manager and assistant to the president, Walter Beech. She and Walter were married in 1930 and two years later co-founded the Beech Aircraft Company, with Walter serving as president and chairman of the board and Olive Ann as secretary-treasurer. Upon Walter Beech's death in 1950 Olive Ann became president and chairman of the board. The excellent reputation of Beechcraft for the production of superb airplanes continued to grow under her skillful leadership. For some 30+ years, Olive lead the development of many new and innovative designs for use in civil aviation as well as a number of military derivatives used by many nations for military pilot training and utility transport. Under her guidance, the company was a leader in adopting the gas turbine power plant to general aviation airplanes. Beech also joined the space age with the development and production of cryogenic loading and transfer systems for NASA's Gemini, Apollo, and Lunar Module spacecraft. In 1980, the Beech Aircraft Company merged with the Raytheon Company, and Olive Ann was elected to the board of directors for this new company. She served in this capacity until her retirement in 1982. Throughout her career, Olive Ann earned the respect of business leaders around the world for her integrity, vision, and hard work. She is the recipient of many prestigious aerospace and business awards, and is considered one of the outstanding business executives in the United States. To many, she was affectionately known as "The First Lady of Aviation." In retirement, she carried on with public service and philanthropic work until her death in 1993.
Inducted in 1995.
Portrait Location: Not Currently on Floor