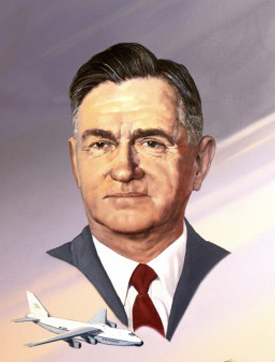 As a young boy, Oleg Konstantinovich Antonov was inspired by the story of Louis Bleriot's flight across the English Channel and decided to make flying his life's work. His grandmother supported this dream, giving him a rubber-powered model airplane that he used as a pattern for one of his own designs. Antonov designed his first glider by the time he was 18 and earned a reputation as a talented designer of gliders while still in his 20s. After graduating from the Leningrad Polytechnical Institute in 1930, Antonov went to Moscow and by 1933 became chief designer of the Moscow Glider Factory, supervising the production of 2,000 gliders per year for flying schools. He designed his first powered aircraft in 1936 and joined the design staff of the Yakovlev Design Bureau as World War II approached. There he worked on training aircraft, transport gliders, and the UAK series fighters. Dreaming of a time when he could build airplanes for peaceful purposes, Antonov was authorized to establish his own design bureau in 1946. In 1947 he produced the rugged An-2 agricultural biplane, which turned out to be one of the most versatile and enduring general purpose aircraft in the world. This design bureau became famous for producing a series of excellent transports. His 4-engine An-12 earned him and his design team the coveted Lenin Prize. Antonov excelled at producing durable transports for the harsh weather and primitive operating conditions in the far-flung Soviet Union. His huge An-22, the largest aircraft in the world at the time, earned him another Lenin Prize when it was introduced at the 1965 Paris Air Show. The highly successful An-124, the world's largest production aircraft, first flew in 1982 and was a fitting crown to Oleg Antonov's brilliant career. His designs set over 350 world records for aircraft performance.
Inducted in 1999.
Portrait Location: Not Currently on Floor