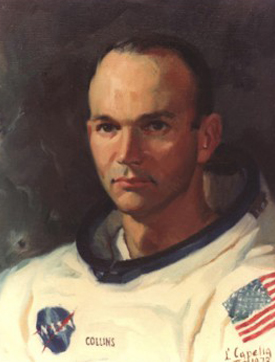 Michael Collins graduated from the United States Military Academy in 1952, choosing to enter the Air Force after graduation. An experimental test pilot at the Air Force Flight Test Center, Edwards AFB, California, he tested performance, stability, and control characteristics of jet fighters, logging over 4,200 hours flying time. He was selected as an astronaut by NASA in October 1963. His first crew assignment was as back-up pilot on the Gemini VII mission. As a pilot on the record setting 3-day Gemini X mission, launched July 18th 1966, he accomplished a successful rendezvous and docking with a separately launched Agena target vehicle. Using power from the Agena, he maneuvered the Gemini craft into a new orbit and rendezvoused with a second passive satellite. At this time Michael Collins made two extravehicular space walks, retrieving a micrometeorite detection experiment from the Agena. As pilot on the epic Apollo XI first lunar landing mission, he remained in lunar orbit while Neil Armstrong and Edwin Aldrin walked the moon's surface. The perfection and skill with which he performed this mission, recovering the Eagle and returning the orbiter to earth, were vital to the success of the mission. After leaving NASA, Col Collins served as assistant Secretary of State for Public Affairs from June 1970 until April 1971. He then became director of the National Air and Space Museum in Washington, DC, guiding the prestigious institution through the planning and construction of its fabulous new facilities.
Inducted in 1971.
Portrait Location: Not Currently on Floor