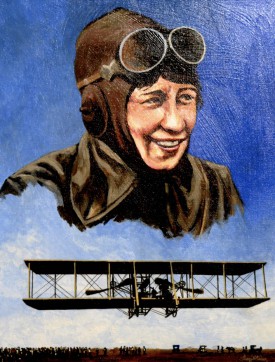 After an inspiring balloon ride in 1911, Katherine Stinson began flight training in a Wright Model "B" aircraft at Max Lillie's Flying School in Chicago, Illinois. On July 24th 1912, she became the fourth licensed American female pilot. A year after receiving her license, she began exhibition flying. On the exhibition circuit, she was known as the "Flying Schoolgirl." It was during this exhibition flying that she established many "firsts." Stinson became the first woman to perform a loop-the-loop at Cicero Field in Chicago, and went on to perform this feat 500 times without a single accident. She was one of the first women authorized to carry mail for the United States, and was the first pilot (male or female) to perform night skywriting. She was also the first woman to fly at the 1916 Calgary Exhibition in Canada. This international recognition earned her an invitation to Japan, where she thrilled crowds with her night skywriting. She went on to perform exhibition flights in China, becoming the first woman to fly in both China and Japan. During World War I, Stinson met gender-based resistance to flying as a military pilot. Undaunted, she began a tour, flying a Curtiss JN-4D Jenny, to raise money for the Red Cross, eventually earning two million dollars in pledges. In 1917, she became the first person to fly nonstop from San Diego to San Francisco, a 610-mile national record for distance and duration. She later broke this record with her 783-mile flight from Chicago to New York.
Inducted in 2000.
Portrait Location: Not Currently on Floor