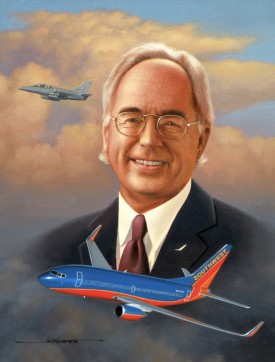 A leading aviation industry visionary, Joe Clark was born in Calgary, Alberta, Canada. Three weeks after his birth, his American father and Canadian mother relocated to a small home in Seattle, Washington. A lifelong resident of Seattle, Clark attended the University of Washington, where he first discovered aviation, and which quickly developed into a lifetime passion. In 1965, when only 24, he founded Jet Air, the first Learjet dealership in the Northwest. His aviation career grew with marketing and sales assignments with Gates Learjet and the Raisbeck Group. Clark co-founded Horizon Air in 1981, a highly successful regional air carrier, later sold to Alaska Airlines. In 1987, he founded Avstar, Inc., establishing a worldwide sales system to market ex-military jet training aircraft. In 1988, he co-established the Friendship Foundation, which set an around-the-world speed record of 36 hours, 54 minutes and 15 seconds in a Boeing 747SP. The event, publicized via television and print media, raised $530,000 for children's charities around the world. Clark co-founded Seattle-based Aviation Partners in 1991, developing blended winglet technology for the Gulfstream II business jet, which reduced its drag by more than seven percent, thereby also greatly reducing fuel consumption. Over seventy percent of the Gulfstream fleet now has blended winglets, and, today, all Boeing business jets and over 1,000 Boeing 737s are outfitted with blended winglets. The goal is to retrofit over 10,000 Boeing aircraft, which would save 1.8 billion gallons of fuel annually, with corresponding reductions in engine emissions. Southwest Airlines, Continental Airlines and Alaska Airlines are just a few of the 40 major carriers upgrading to blended winglet technology. Because of his contributions to this technology, Clark has been nicknamed the "Lord of the Wings." He has been named a trustee of the Museum of Flight in Seattle, was named Innovator of the Year by Professional Pilot Magazine, as well as Entrepreneur of the Year by Aviation & Business Journal Magazine. He is a member of the Horatio Alger Association.
Inducted in 2010.
Portrait Location: Modern Jet & Space Age Gallery