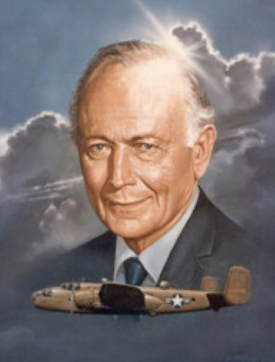 John Leland Atwood graduated from the University of Texas in 1928 with a degree in civil engineering. A prominent figure in the nation's aerospace industry for over 40 years, he made numerous important contributions to the field, from the beginnings of commercial flight to man's conquest in space. Starting out as a junior airplane engineer with the Army Air Corps in 1928, Atwood later joined the Douglas Aircraft Company. As chief of structural design, he helped develop the DC-1, DC-2, and DC-3 family of commercial planes. Joining North American Aviation in 1934 as chief engineer and vice president, Atwood was later elected president and chief executive officer of this company. At North American he personally originated the design concept of the P-51 Mustang fighter, which has been described as "the most perfect aerodynamic aircraft of World War II." Other aircraft designed under his leadership include the T-6 Texan Trainer, used by almost every Allied nation during World War II; the B-25 Billy Mitchell bomber, which made the historic raid on Tokyo in 1942; the F-100 Super Sabre, the world's first operational supersonic fighter; the hypersonic X-15 which set world altitude and speed records; the XB-70, the most advanced aircraft of its size ever built; and the B-1 strategic bomber. Headed by Atwood, North American Aviation produced over 60,000 military aircraft. In 1967, North American Aviation merged with the Rockwell Standard Corporation, naming Atwood president and chief executive officer of the newly-formed North American Rockwell Corporation, now known as Rockwell International. Under Atwood's direction, this company developed and produced the Apollo command and service modules, which carried men to the moon nine times. Also produced, were the S-II second stage of the Saturn V lunar launch vehicle, the F-1 and J-2 rocket engines of Saturn V, and the guidance and flight control systems for the Minuteman intercontinental missile. Atwood was also instrumental in the development of the space shuttle.
Inducted in 1984.
Portrait Location: Not Currently on Floor