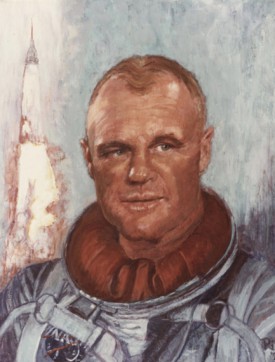 In 1942 John Hershel Glenn, Jr. graduated with a science degree in engineering from Muskigum College, and obtained his commission in the U.S. Marine Corps through the Naval Aviation Cadet Program in 1943. After advanced training, Glenn joined Marine Fighter Squadron 155 and spent a year flying F-4U fighters on 59 combat missions in the Marshall Islands. From 1949 to 1950 he was an instructor in advanced flight training in Corpus Christi, Texas, and at amphibious warfare training in Virginia. While on duty in Korea, he flew 63 missions with Marine Fighter Squadron 311 and 27 missions as an exchange pilot with the Air Force. In the last 9 days of fighting in Korea, he downed 3 MIG aircraft in combat along the Yalu River. After Korea, Glenn attended the Navy Test Pilot School at Patuxent River, Maryland, and was assigned to the Fighter Design branch of the Navy Bureau of Aeronautics in Washington. During this time he also attended the University of Maryland. In 1957, he set a speed record from Los Angeles to New York in an F-8U, the first transcontinental flight to maintain a supersonic speed average. Glenn was chosen with the first group of astronauts in 1959. He served as backup pilot for Alan Shepard before his own flight on February 20th 1962. In Friendship 7, Glenn became the first American astronaut to orbit the Earth, making 3 orbits in 4 hours 56 minutes, traveling up to 17,545 miles per hour. In January 1963, Glenn was assigned to Project Apollo planning, specializing in the design and development of the spacecraft and flight control systems. He retired from the Marine Corps and from NASA in 1964 to go into private business and enter politics. He was elected a U.S. Senator from Ohio in 1974. On February 20th 1997, the 30th anniversary of his orbit around the earth, Glenn announced that he would retire from the Senate. A year later, NASA invited him to rejoin the space program, and on October 29th 1998, he became the oldest human ever to venture into space.
Inducted in 1968.
Portrait Location: Space Gallery